The newest version of ClockTuner for Ryzen (CTR) is now available to anyone and everyone, after the utility's developer opened up access to Patreon subscribers a little over a month ago. It brings with it a bunch of changes and upgrades, including a refreshed GUI, though it is the support for AMD's latest generation Ryzen 5000 series processors that is perhaps the biggest draw.
Cynics will note that Zen 3 silicon is in frustratingly short supply, and that is true. But that will not always be the case (we hope not, anyway). There said, some people have actually been able to acquire a Ryzen 5000 series CPU, either as a standalone purchase or as part of a prebuilt desktop. Those who have one can leverage CTR 2.0 to squeeze additional performance out of their shiny new chip.
This is a relatively new utility developed by Yuri Bubliy (@1usmus on Twitter), who also built the popular DRAM Calculator for Ryzen program. CTR 2.0 gives users finer grain control over certain parameters in pursuit of higher overclocks and better overall performance. 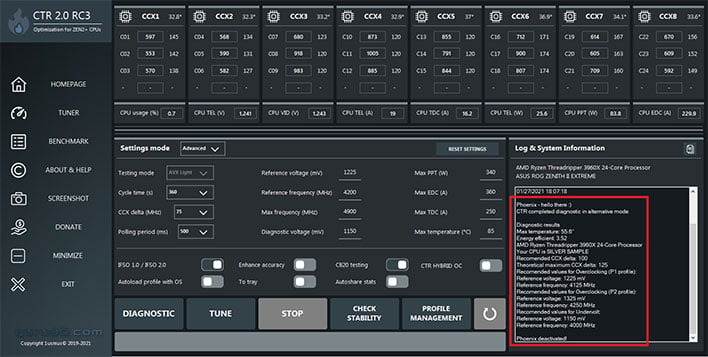 ClockTuner for Ryzen 2.0 sports a refreshed GUI with a special dark theme

This is purportedly the best release yet. Yuri notes that development of the previous two builds (1.0 and 1.1) did not come easy "and many users experienced a few problems and bugs which could not be fixed with a hotfix or patch." So the decision was made to remake the utility, a challenging endeavor considering AMD and its hardware partners did not assist with the project.
"It was decided to re-create the project in a fairly short time without the proper support from the company’s giants. Even if some samples were provided (low and mid-end processors), there was no information support at all. Fortunately, people in the community had valuable information and skills, which made it possible to turn all plans into reality," Yuri explains.
One of the challenges was dealing with a completely new architecture, that being Zen 3. This also brought about some benefits to end users who want to tinker, because of the improved power and voltage management. That said, Yuri says the "Energy Efficiency" section of CTR did not make it into the 2.0 release because few people seemed to care about it. However, the energy efficiency factor can be found in the diagnostics report. CTR 2.0 also adds certain telemetry monitoring elements.
The other new feature of note is a new Hybrid OC model. This utilizes both manual OC and PBO at the same time, and is supposed to ultimately offer better performance results any any workload. It's also easy to use, since CTR controls everything in a minimized state.
Yuri posted an extensive user guide on Guru3D, along with download links for CTR 2.0 and Cinebench R20.