2020 was a miserable time for many of us due to the COVID-19 pandemic. The loss of life, mandatory lockdowns, and not knowing when life would get back to normal weighed heavily on the minds of many people. During that time, however, the necessity of working (and learning) from home meant that PC sales soared dramatically.

According to Canalys' data in early January, full-year 2020 PC sales jumped 11 percent, marking the most significant leap since 2010. Today, Canalys is back again with data from Q1 2021, and it's once again looking good for the PC market. According to the research firm, this was the fourth consecutive quarter of growth for the industry, and overall, PC shipments increased 53.1 percent for Q1 2021 versus Q1 2020.

One sector that saw a significant increase in shipments was Chromebooks. Compared to Q1 2020, first-quarter shipments of Chromebook jumped by nearly 275 percent. Given the prevalence of distance learning for school-age children, it should come as no surprise that the cheap to purchase and relatively inexpensive to maintain devices would be a hit with school districts and parents. 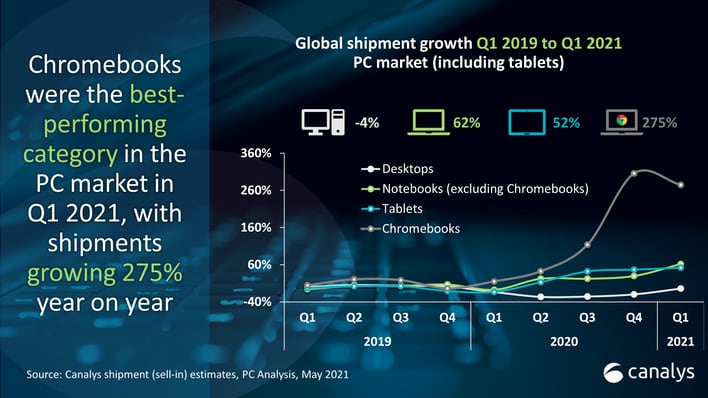 Hewlett-Packard is now the leader in the Chromebook sector, with a 36.4 percent market share, followed by Lenovo with 25.9 percent. These companies recorded annual growth of 634 percent and 309 percent respectively for Q1 2021 compared to the same period last year. However, Samsung was also a big winner, recording a whopping 2233 percent growth to take its share of the Chromebook market from 1.6 percent during Q1 2020 to 10 percent during Q1 2021.

"Chromebooks are well and truly a mainstream computing product now," said Canalys Research Analyst Brian Lynch. "While the education sector still accounts for the majority of shipments, their popularity with consumers and traditional commercial customers has reached new heights over the course of the last year." 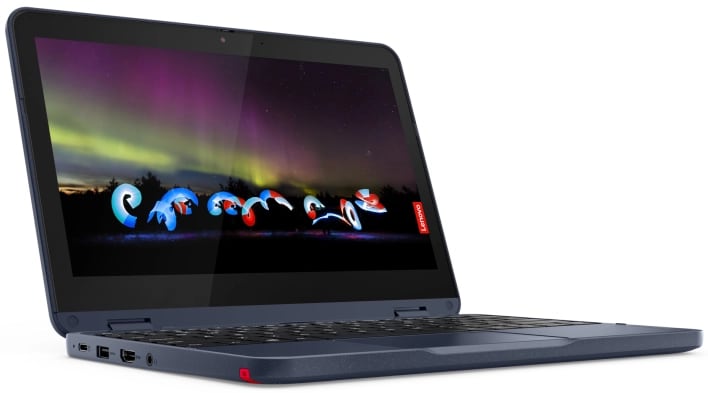 Laptops were also a big hit with consumers, showing year-over-year growth of 62 percent, while tablets weren't that far behind with 51.8 percent growth. Lenovo was the leader in laptop sales, with 24 million units sold during Q1 2021, while Apple was not far behind with 22 million. Apple was the leader in the segment with 38 percent of the market (50 percent annual growth), while Amazon experienced nearly 200 percent growth to secure fourth place.

"The tablet market continues to defy expectations with the strength of its comeback," added Canalys Research Analyst Himani Mukka. "Even beyond the traditionally strong holiday season, vendors are seeing elevated demand as the need for affordable computing power and connectivity persists."

Not surprisingly, desktops were the outlier in the data, posting a 4 percent decline in shipments compared to last year. It remains to be seen how long the PC industry can keep up this stellar sales performance, especially considering the ongoing global chip and component shortages affecting many OEMs.