In the tweet, it states China is the third country to discover a new mineral on the moon. The other two countries include the United States and Russia. The second discovery, that the moon's surface may contain a key ingredient for nuclear fusion, could provide an unlimited resource for future moon bases and possibly here on Earth as well, if true.

The crystal, Changesite-(Y), was part of a collection of lunar samples collected by Chang'e-5, China's lunar probe mission. The probe first landed on the moon in 2020 and has since excavated about four pounds of lunar rocks and delivered them back to Earth since. 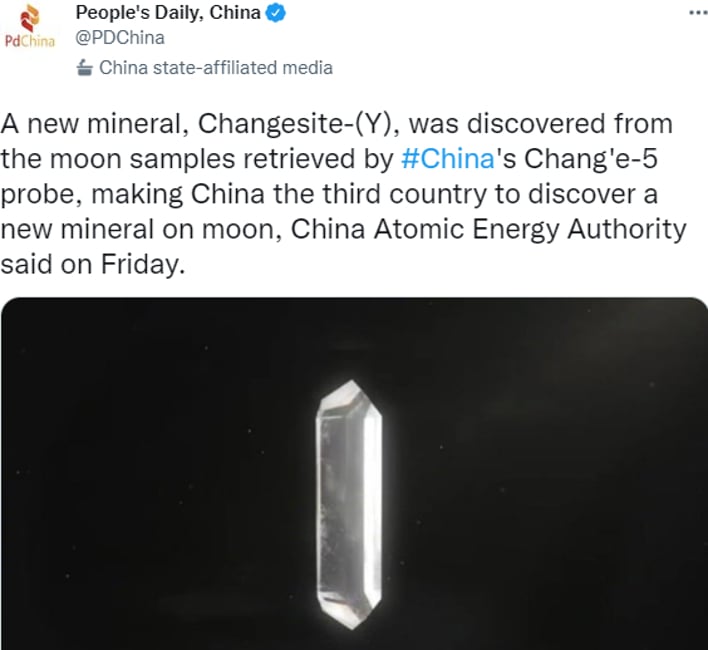 The samples were the first to be returned from the Moon since 1976 and have since been inspected by scientists at the Beijing Research Institute of Uranium Geology. This is where a single crystal particle, Changesite-(Y), was discovered with a diameter smaller than the width of a human hair. The name chosen for the new mineral is after the Chinese Moon Goddess, Chang'e, which is also the Goddess that inspired the naming of China's lunar missions.

Perhaps the more exciting find was that of lunar samples consisting of helium-3, a version of the helium element that has the potential of being a nuclear fusion fuel source. This version is exceptionally scarce on Earth, but it could be plentiful enough on the Moon's surface to provide an energy source that makes nuclear fusion more feasible in the future.

While intriguing, there is still the matter of how to get enough of the helium-3 back to Earth to power such a nuclear reactor. The more probable use case could be utilizing the resource on the Moon itself for powering future Moon bases. NASA is already in the planning stages for developing a lunar base to serve as a stop for future missions to Mars and beyond.