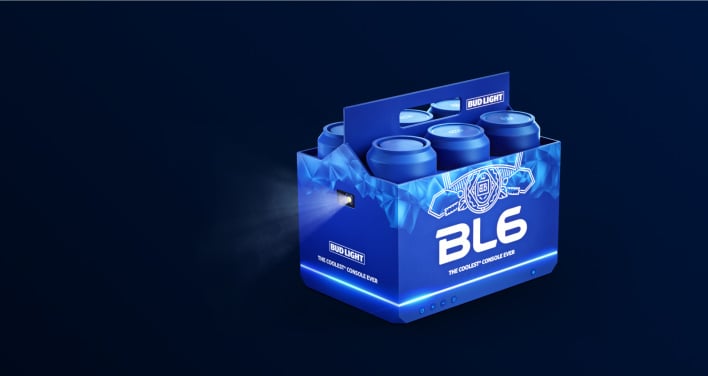 The next-generation Xbox and PlayStation consoles launched last week, but it looks like Bud Light felt left out? The design team at Bud Light decided to whip up a new console that combines two of our favorite things: beer and gaming gear.
The BL6 is the “world’s first ever self-cooling six pack that also plays video games,” which is “½ koozie, ½ projector & ½ gaming console.” While we are not sure the math checks out there, it is still an interesting piece of tech that you could get your hands on soon.

Bud Light did not give many details on their webpage for the device, but what we know is that the BL6 is a console, projector, and two-can cooler at the same time. According to UK PCMag, the BL6 is a Windows 10 PC with an Intel i7-1065G7 and 16GB of RAM under the…lid? Cooler? In any case, it is a capable PC that can drive the included games, such as Tekken 7, Soul Calibur 6, RBI 20 Baseball, and more for up to two hours before the battery dies.

To play those games, you need to use the included peripherals. Bud Light put their own specially designed controllers in the console as well as an ASUS DLP projector with a 720p resolution and 500 lumens of brightness. If you want to see the whole console, Bud Light even made a short trailer for it which you can watch below.


To say the BL6 is weird may be an understatement, but it is certainly interesting. Bud Light could have gone the Taco Bell route and skinned an Xbox or PlayStation, but this may be one step above that. After all, how many other breweries also make consoles? If you want to see about getting a console, they have them up for charity auction right now, and we could see more of them in the future. Also, let us know what you think of this…cooler console in the comments below.