Some of you reading this might be doing some from with the privacy-focused Brave browser. Heck, a lot of you might be, given the latest statistics Brave shared as part of its year in review. By the end of 2021, Brave was seeing over 50 million monthly active users, which is twice as much as at the end of 2020. It also marks the fifth year of enormous growth.
"Passing 50 million users is a tremendous milestone for our company. It is also a powerful confirmation of the global movement underway led by users seeking alternatives to the surveillance economy," said Brendan Eich, CEO and co-founder of Brave. "We’ve spent a successful year expanding our product range and our ecosystem, engaging with partners who share our vision for a Web free from Big Tech’s shackles."
Eich created the JavaScrip programming language and co-founded Mozilla, makers of Firefox, where he served as CEO until resigning amid a controversy over same-sex marriage. He then co-founded Brave Software in 2015 and launched the first version of Brave at the beginning of 2016.

For the uninitiated, Brave is based on Chromium, the same as what powers Google's Chrome browser, but is hyper-focused on privacy. It goes about this in different ways, but the mantra of privacy-first has resonated with a growing number of users. 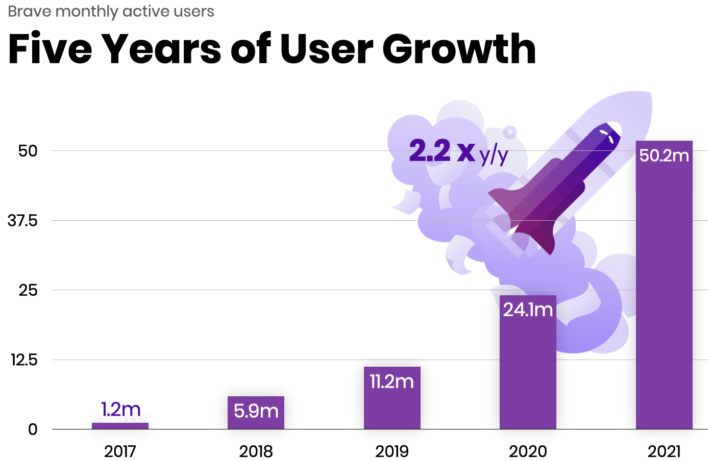 That's evidenced by Brave seeing its monthly active users double up each year for the past five years. Back in 2017, Brave had 1.2 million monthly active users in its fold, and that has ballooned to 50.2 million as the 2022 gets underway.
"We have seen an incredible response among our users, creators, and community. We aim to double this growth again in 2022 and engage with even more users who seek a privacy-conscious way to browse the Web that rewards them instead of punishes them with tracking, and helps them directly support creators," Eich added.
Brave also claims it has seen the most mobile growth of any browser in 2021 with over 10 million downloads. Part of that is because other browsers already have huge numbers on mobile, but it's still impressive.
It will be interesting to see if Brave can keep its doubling streak going for another year.