Back in June of this year, Hyundai Motor Group acquired a controlling interest in Boston Dynamics, the robotics experts who have put out several entertaining videos highlighting some remarkable robot capabilities (laugh now, cry later when the robot overlords flip the script). One of their more popular creations is Spot, the goodest-of-boys in the robot realm. What is Spot up to these days? Patrolling a Kia plant in South Korea.
Hyundai has kicked off a pilot program called "Factory Safety Service Robot," which is based on Spot, the quadruped robot that has seen plenty of action (even in French military exercises). It's basically Spot with a new role and some new tricks, and a special task—patrol the facility for hazards, including intruders, potential fire hazards, and so forth.
Check out Spot in action in its new role...

"The Factory Safety Service Robot is the first collaboration project with Boston Dynamics. The Robot will help detect risks and secure people’s safety in industrial sites," said Dong Jin Hyun, Head of Hyundai Motor Group Robotics Lab. "We will also continue to create smart services that detect dangers at industrial sites and help support a safe work environment through continuous collaborations with Boston Dynamics."
This version of Spot is not able to deliver beer by way of a pee blast (it's been done), but it is armed with an integrated thermal camera and 3D LiDAR to detect flesh and blood humans in the vicinity, monitor for high temperature situations that could pose a fire hazard, and detect whether a door is open or closed. 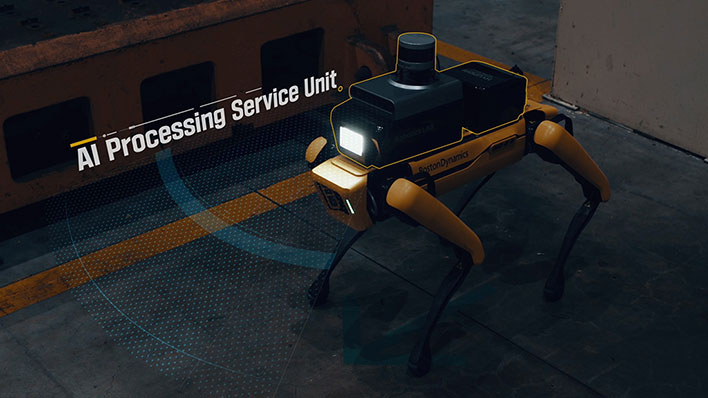 There is obviously some advanced artificial intelligence (AI) at play here. Hyundai also notes that Spot can be controlled remotely through a secure webpage, which also provides a livestream of its movements. It's like a high-tech security camera, except it can move around and is infused with AI to detect dangers and send alarms to its human overlords. It also sends photos in real-time and maintains an activity log.
"Managers can switch to manual teleoperation whenever needed to conduct a closer look at important industrial sites. It is also possible to connect multiple Factory Service Safety Robots to the control system to simultaneously check various zones," Hyundai says.
Hyundai says this version of Spot can navigate through narrow spaces and identify blind spots that humans might otherwise miss. And it is all part of its autonomous capabilities.
At present, the pilot program has Spot supporting nighttime security personnel. Hyundai views this as a proof-of-concept and will assess both its effectiveness and potential applicability in hopes of expanding its patrol area and deploying the watchdog at other sites.