Borderlands 3 fans have a new minigame that they can access the next time they are aboard Sanctuary III. The new minigame is called Borderlands Science and can be found in the corner of Doctor Tannis' infirmary. The minigame was developed in cooperation with McGill University, Massively Multiplayer Online Science, and The Microsetta Initiative in a bid to help map human gut microbiome.

In other words, Borderlands Science is a puzzle game that players play to help benefit real-world science research. The game presents players with simple block puzzles that are based on strands of DNA. By solving the puzzles, players are helping to map and compare the microbes contained inside the strands of DNA. Completing the puzzles allows players to earn in-game currency that can be redeemed for things such as Vault Hunter Heads and Skins, along with timed boosters that help buff stats, loot quality, and experience gains. 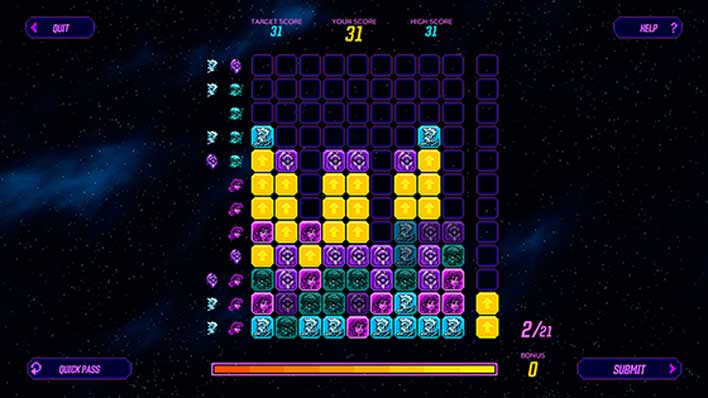 The developers behind the game say that computers aren't always perfect at organizing data; they often make lots of small mistakes that could corrupt subsequent analysis. As players play the game, they can solve the complex task of fixing errors via an easy to understand and play game mechanic. Colored tiles are offered that represent different nucleotides appearing on a grid. Players nudge them into their columns and attempt to organize them into their correct rows.

While it's not always possible to align all the tiles correctly, attempting the puzzles is helpful, as players are identifying errors in real-world computer analyses. The puzzles that players will try to solve have a target score that's required to be met or exceeded to progress and get credit for solving. Not hitting a target score doesn't mean that players are required to move onto the next puzzle; there are often additional moves that can be made to reach the target score.