Earlier the week, BMW officially unveiled the latest version of its 3-Series 4-Series Coupe, and it was quite the head scratcher with regards to its looks. Although the BMW Concept 4 had already prepared us for the massive, vertically-oriented grille, seeing it on the production car made it seem even more offensive to many.

Well, apparently BMW isn't done shocking its customer base as it is swinging for the fences with the next-generation M4. The new M4 leaked this week, and as we can tell from images, the grille looks even larger -- if you can imagine that -- than it does on the 4-Series. Although it's likely not actually any larger; the blacked-out nature and horizontal slats give it the appearance of looking bigger. There are also lower vents on either side of the grille and what appears to be vertical slits on the corners of the bumper to feed air to what will likely be enormous brakes.

BMW chief designer Domagoj Dukec is making no apologies for the grille. “It should be in the core of BMW to have a product which makes a strong statement. It’s unmistakably BMW, unmistakably 4-Series. It’s not just logical, it has a very strong character that’s unique to our brand”, said Dukec in an interview with Autocar. “The twin-kidney grille is the most prominent design icon we have. It’s the biggest difference we have from any other car out there. We’ve used the kidney in a variety of ways to give our cars a certain presence: the 3-Series has a very horizontal one because it’s a more rational, serious car. A coupe like the 4-Series should express the exotic part of BMW.” 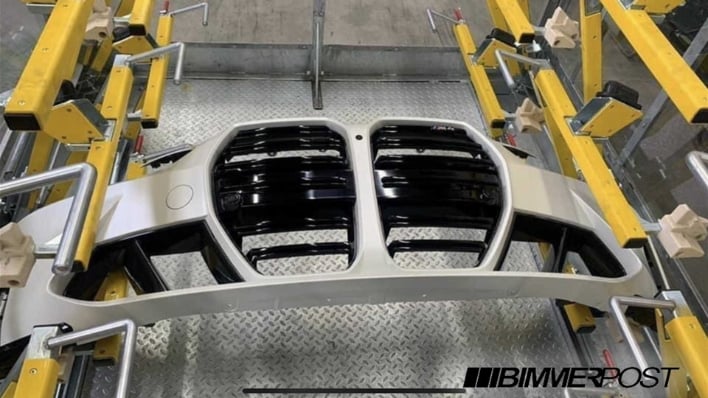 Compared to garden variety M440i, the M4 has M-style side mirrors along with swollen fenders front and rear to accommodate larger rolling stock. Although we can't see the back of the car, we expect there to be a more aggressive bumper, deck spoiler, and quad tailpipes replacing the dual-pipe setup on the M440i.

BMW has indicated that both the M3 Sedan and the M3 Coupe will make their world debut in September.