BMW has unveiled the all-new 4 Series Coupe and promises that it will be on showrooms by October. The vehicle is a sporty two-door car aimed at the premium midsize segment that promises BMW's iconic "dynamic driving pleasure." One of the most polarizing features about the all-new 4 Series is its front grille. It's much larger than past models and extends past the area where the license plate would be attached. It's not particularly attractive to our eyes, but maybe some might find it appealing. Not since the X7 full-size SUV launched has the German automaker ruffled so many feathers among its fanbase.

When sales kickoff in October, there will be five models available, with the top-of-the-line variant being the M440i xDrive Coupe. The car is powered by a 374 hp inline 6-cylinder engine pushing the car from 0 to 62 mph in 4.5 seconds and to 155 mph. Other models in the range will be offered with two gasoline four-cylinder engine options, and some markets will get a four-cylinder diesel unit. In March 2021, a pair of six-cylinder inline diesel engines will be added to the line. 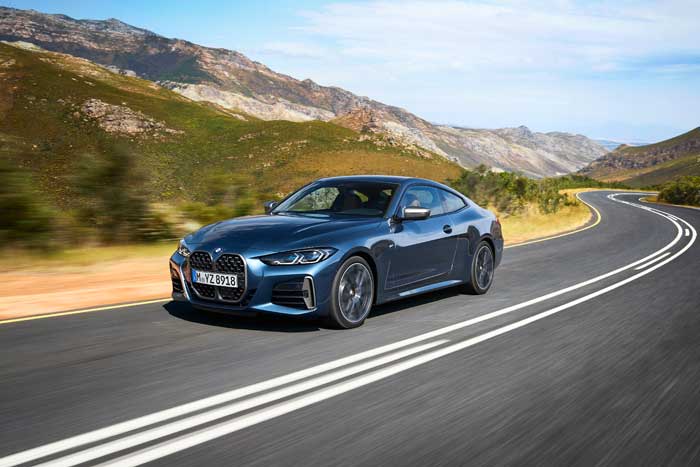 The gasoline six-cylinder inline engine and all diesel versions will have mild-hybrid technology. BMW's mild-hybrid technology uses a 48V starter-generator to boost the combustion engine with an extra 11 hp. The new diesel engines also feature two-stage turbocharging. All versions of the 4 Series come standard with an eight-speed Steptronic transmission with an optionally available eight-speed Steptronic Sport transmission with a new Sprint function.

At launch, two gasoline versions of the 4 Series will be available with xDrive intelligent all-wheel drive, while four diesel versions will be offered in all-wheel-drive. The new 4 Series Coupe features a center of gravity that's 21 mm lower, and a rear-axle track that's 23 mm wider than on the latest BMW 3 Series Sedan. The vehicle features a 50:50 weight distribution and optimized aerodynamics to reduce lift in the rear axle. 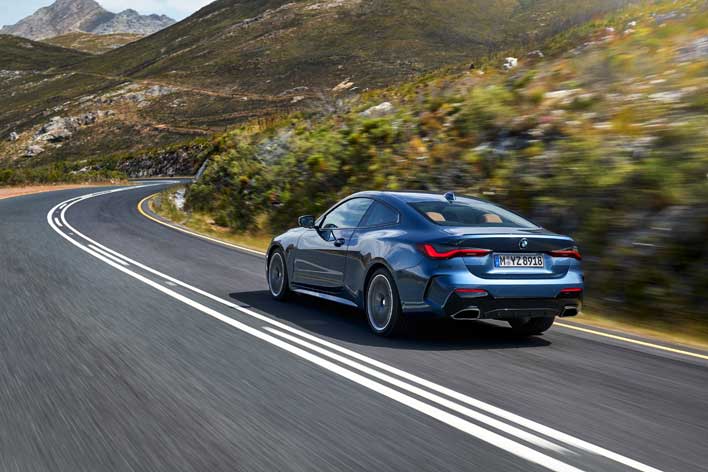 What BMW calls "Lift-related" dampers with bespoke tuning are standard on the 4. Optional M Sport suspension with a firmer set up for the dampers, mounts, and anti-roll bars, along with additional body struts and variable sport steering are available. BMW Adaptive M suspension with electronically controlled dampers, M Sport brakes with blue or red calipers, and an M Sport differential with fully variable locking function in the rear are all optional. As for the polarizing front grille, BMW says the design follows the tradition of legendary BMW coupes and reflects the high cooling air requirement for the engine. The smaller grille used on the BMW X6 in Vantablack from last year is the grille design we prefer. 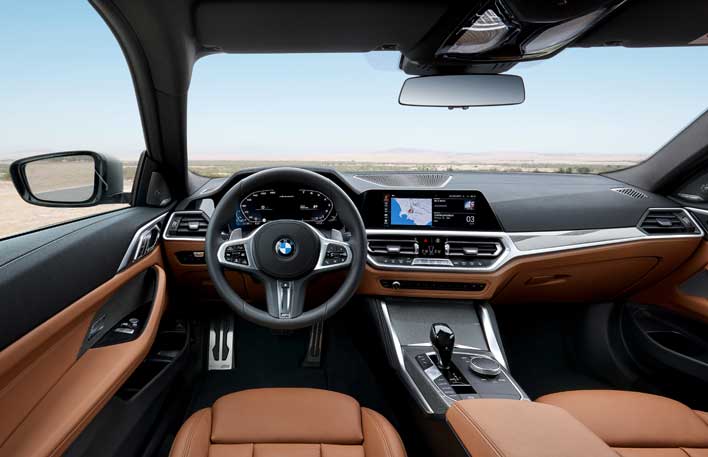 The vehicle has an entirely new interior design with a 10.25-inch Control Display and an optional fully digital 12.3-inch instrument cluster. Three-zone automatic climate control is standard along with acoustic glass in the windscreen. Several driver assistance systems are offered with front collision warning with brake input and Lane Departure Warning with Lane return using steering assistance standard. A navigation system with cloud-based maps is included as standard, along with Apple CarPlay and Android Auto. The vehicle also supports OTA software upgrades over WiFi for new vehicle functions and digital services for the car. Pricing will be announced closer to launch.