A smooth launch is critical for any games developer to set the stage for success. It seems like Blizzard has not had particularly good luck with that for its PC titles, though, and Overwatch 2's launch is not any different. Yesterday was the official release date of the anticipated sequel to the popular first person shooter, Overwatch, and Blizzard's servers are getting slammed by distributed denial of service attacks (DDoS). This is preventing users from logging in and playing the new title.

A DDoS attack is usually a coordinated effort, often done by malicious actors, to flood a network with data and requests meant to slow or stop response times for web-based services. The "distributed" factor of this is usually because there are many computers or devices attempting to communicate simultaneously. Sometimes, though, these actually happen unintentionally because a service underestimates the total necessary hardware and network capacity needed for the traffic that comes in. Such underprovisioning was the primary source of Diablo III's launch troubles.

Unintentional self-DDoS does not seem to be the case here, though. According to a tweet by Blizzard president Mike Ybarra, they have detected the issue as "a mass DDoS attack" specifically and that there was already teams working on it. Which it did look like they took care of mostly, until a few hours later when Overwatch 2 game director, Aaron Keller tweeted that there was a second DDoS attack on Overwatch 2 servers that the Blizzard teams were working to mitigate. 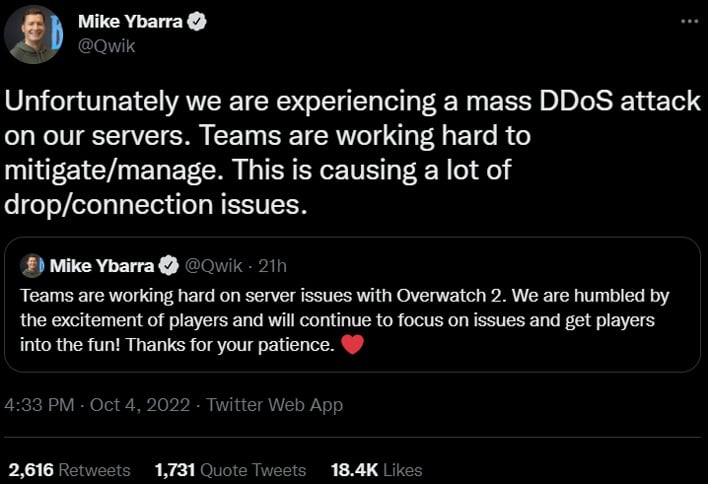 Seeing their teams working on getting the issue resolve quickly is good, considering the bevvy of things that have put Activision-Blizzard into the news as of late. Of course Microsoft's bid to purchase the games development company hit a snag recently when dealing with UK and EU regulators. Additionally there has been much talk of unfair worker treatment and wages, particularly from the now-unionized Raven Software team.

There is also the fact that the original Overwatch shut down a little under a day before Overwatch 2's release. This shows a weakness in games-as-a-service where, in many cases, once the developer decides it's done, you can no longer play a game. Blizzard did offer up credits in Overwatch 2 for anyone who purchased the first title, but many gamers were none-too-happy with this move. 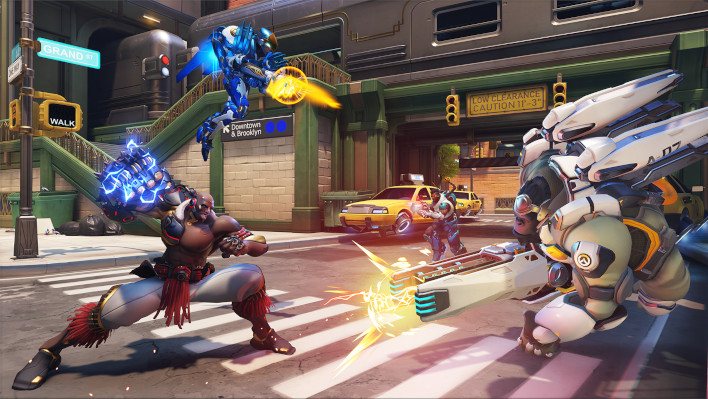 There are some pretty cool updates, when it comes to hardware compatibility for the game, though. Apparently Nvidia's 4090 GPU is so fast that the team actually bumped up the max frames-per-second on Overwatch 2 to 600 FPS. Hopefully all those DDoS attacks can be fully thwarted sooner rather than later so gamers who already have their hands on those cards can enjoy some sweet sweet frames.