Last year's Overwatch League was canceled due to the COVID-19 pandemic, and that temporarily pumped the brakes on some interesting AI projects, as well. At the time, Blizzard and IBM were set to announce that Big Blue was about to become the cloud, AI, and machine learning analytics partner for the game's official e-sports platform. Blizzard and IBM hope that this partnership will lead to figuring out new ways to evaluate performance, fix balance issues, and much more. Now that Overwatch League is back on for 2021, the partnership is starting to bear fruit.

IBM has developed an AI-powered ranking system that will not only separate the wheat from the chaff, but hopefully also bring the best of the best to the top of the leaderboard. The company has done this sort of thing before, such as a trade assistant for ESPN's fantasy football leagues. While American football -- or at least fantasy football leagues -- boil the game down to two facets, offense and defense, Overwatch is a little more complex.

Besides the damage (offense) and tanking (defense) roles, Overwatch has a variety of support characters whose job is in support roles. Support roles in Overwatch include healing, boosting other players' damage output, and sight of the opposition (Zenyatta's Orb of Discord). On top of that, many characters cross roles, such as Brigitte who has a passive healing ability and more actively-used offensive abilities like stun. All of these factors make the ranking system a little more complex to implement. Blizzard's Ben Trautman, Blizzard's lead data analyst for Overwatch League, said the company tried "for years" but just couldn't put together a reasonable ranking system.

Just as Overwatch is a 6v6 multiplayer game, IBM pulled in a six-person team of data scientists in Germany to study analytics data and help devise a ranking system, dubbed Area 631. At the heart of their efforts were IBM's Cloud Pak for Data and Watson Studio. Cloud Pak for Data helped collect analytics data and optimize it for use by AI models. This takes much of the load of organizing data off of humans and automates it. Figuring out what data is useful and how it should be organized is the first step towards building a successful AI model. Garbage in, garbage out, as they say. 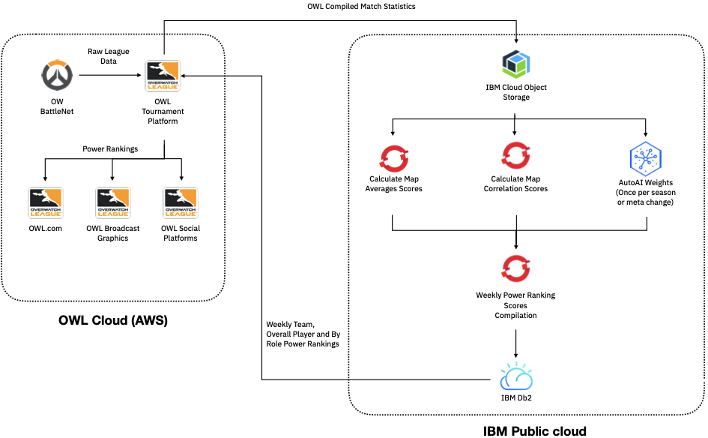 Once the data has been put together, Watson Studio's AutoAI went to work. IBM says that AutoAI can help companies with little or no data science expertise to automate end-to-end processes that figure out what data is important and put it to work. The Area 631 team went to work in September of 2020 to figure out how AutoAI and IBM's considerable cloud resources could organize Overwatch data in a way that makes sense and ranks players based on skill rather than role.

Overwatch collects more than 360 different types of data during a match, and a single match has nearly two million data points. Over the course of a season, IBM had more than 400 million records to comb through and suss out what performance data it finds to be valuable. That includes total damage output, damage taken, healing, skill uses, and so on. The Area 631 team's blog post shows the basic architecture of how its rankings will work.

More detailed analysis of how Area 631's AI model works to rank players will have to wait until the season is in full swing. The 2021 iteration of the Overwatch League kicked off yesterday, April 16, so there will be more to come. Blizzard is already using IBM's AI model in its power rankings, and that will be interesting to watch as the season unfolds.