Blizzard recently hinted at a new survival game project, and its newly-unionized developers are super-excited about it. This may well be the most bizarre non-announcement of a new title in the history of gaming, but considering the parties involved it's ripe for discussion. You see, the company has framed the “announcement” through the lens of a job posting.

Right now, it’s just being called “Unannounced Survival Game,” but current and former Blizzard devs are really hyped up about its birth. Amazon Games developer Jan Klasing says she’s been waiting for the announcement for ages, and that the vision is amazing.

Craig Amai, project lead for the game, described it as once just “a humble pitch deck on my desktop.” Now, he says, it’s grown into a team of people sharing a vision he “couldn’t be prouder to be part of".

The non-announcement comes after a season of controversy and strife at Blizzard, and Microsoft’s recent acquisition announcement. Blizzard’s new chief, Mike Ybarra, has promised the company will start putting its teams and players first.

Lest you think perhaps Blizzard has “encouraged” its employees to sing praise after the recent strife and controversy, a company spokesperson has addressed that. In a statement to PC Gamer, the representative said Blizzard “did not encourage employees to make positive posts about the recent announcement.”

Activision’s premier PC and console game studio says it wants to expand the team behind the project. “Every story needs a teller,” the announcement reads. And every world needs builders. What if that could be you?” 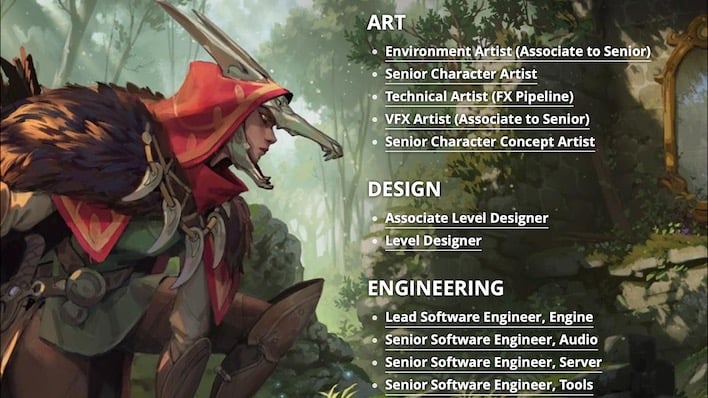 To that end, the studio has announced a blizzard of new openings. The game announcement has spurred a host of opportunities in art, design, and engineering. In all, there are 11 career opportunities listed, including lead software engineer for the game engine, technical artist for effects, and senior character artist.