Just one year ago, Bitcoin's value was in the stratosphere at a whopping $65,000 per coin. A series of market-shifting exchange collapses have now dragged prices down to barely over $15,000, erasing years of gains and threatening further liquidity issues that could cripple still more cryptocurrency firms. The community points the finger at Sam Bankman-Fried and his failing FTX exchange, but this is just the latest in a long line of bitcoin bungles.

Cryptocurrency values started tanking earlier this year when one of the most popular "stablecoins" known as Terra collapsed in value. This caused firms like Celsius and Three Arrows Capital had to suspend operations, which turned the crypto market upside down. The failure of FTX has deepened losses to the point that now over half of all Bitcoin addresses are in the red, meaning the Bitcoin they hold is worth less than it was when acquired. A Bitcoin today is worth about a quarter of what it was a year ago.

The latest crypto disaster started just a few weeks ago when reports surfaced of shady dealings, involving mishandling of customer funds, between FTX and its partner Alameda Research. Several large holders of FTX's own token tried to cash out, and FTX didn't have the assets to cover the withdrawals. Crypto heavyweight Binance agreed to step in and acquire the exchange, but the firm backed out after seeing FTX's books. Just like that, a company that was valued at $32 billion in September fell apart and filed for bankruptcy. 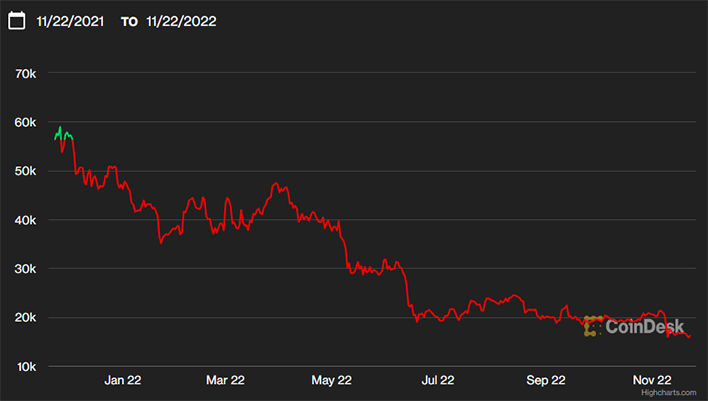 The continued drop in Bitcoin value isn't just a problem for individuals who are holding the cryptocurrency in their wallets—numerous companies in this space hold a large volume of their assets in Bitcoin, which is the most popular cryptocurrency. As the value drops, they may find themselves insolvent as well. Exchanges can't even take refuge in other cryptocurrencies because the entire market is contracting. Ethereum is worth just over $1,100, which is down 70% from a year ago, and Binance’s BNB token is down 50% year-over-year at $263.

As for FTX, it's unlikely most of the individuals and companies that parked their funds in Bankman-Fried's venture will ever see that money again. An interim CEO has been appointed, but it could take years to unwind the scheme.