Woe is the investor who put all their investment funds into cryptocurrency, because chances are their portfolio isn't looking so hot right now. The cryptocurrency market is experiencing a huge decline the likes of which we can't remember seeing before. And as this is happening, Coinbase, the largest crypto exchange platform in the US, decided now would be a good time to make a startling bankruptcy disclosure.
Maybe the two go hand-in-hand, maybe not. There's a lot to unpack here, so let's start with Coinbase and the brouhaha over its bankruptcy disclosure.

Coinbase this week announced its first quarter earnings in which the exchange posted a quarterly loss of $430 million and a 19 percent loss in monthly users "driven by lower crypto asset price volatility and lower crypto asset prices overall."
Coinbase said the steep drop in MTUs (monthly transaction users) was not unexpected and it is doing its base to put on a brave face for investors, saying "these market conditions are not permanent and we remain focused on the long-term." But the statement that really raised eyebrows was in reference to user funds not being protected if the exchange were to declare bankruptcy.
"Because custodially held crypto assets may be considered to be the property of a bankruptcy estate, in the event of a bankruptcy, the crypto assets we hold in custody on behalf of our customers could be subject to bankruptcy proceedings and such customers could be treated as our general unsecured creditors," Coinbase stated in an SEC filing (PDF).
The next line discloses that this could cause customers to find its services "more risky and less attractive." It's important to note that even though blockchain is supposed to give users better control over their funds, storing currencies in a digital wallet operated by an exchange like Coinbase means some of the advantages disappear. Coinbase is the one that holds a user's private key, as users trade some level of protection for the convenience of a popular exchange.
This revelation sparked some panic, prompting Coinbase co-founder and CEO Brian Armstrong to post a series of tweets attempting to set the record straight and soothe any fears resulting from the disclosure. 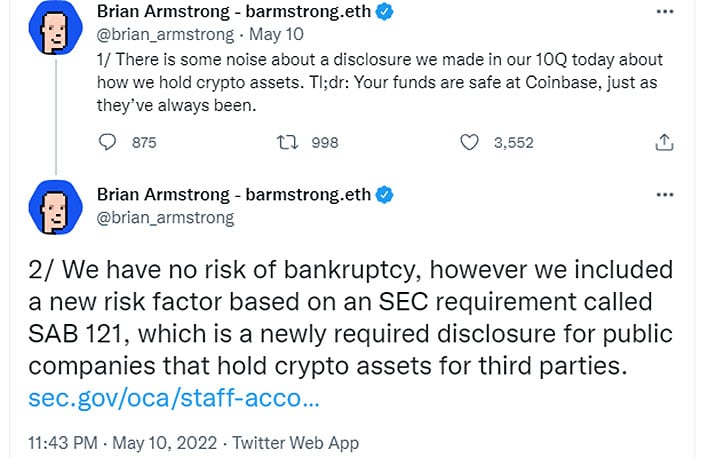 "Your funds are safe at Coinbase, just as they've always been," Armstrong said. "We have no risk of bankruptcy, however we included a new risk factor based on an SEC requirement called SAB 121, which is a newly required disclosure for public companies that hold crypto assets for third parties."
He goes on to say that Coinbase should have updated its retail terms sooner and apologized for not having done so. He also notes that the legal protections outlined have not been tested in court when it comes to crypto assets, "and it is possible, however unlikely, that a court would decide to consider customer assets as part of the company in bankruptcy proceedings even if it harmed consumers."
There's not a lot of warm fuzzies in that latter statement, and it's entirely possible that the situation as a whole contributed to the cryptocurrency market taking a nosedive.

Cryptocurrencies Are Plummeting In Value 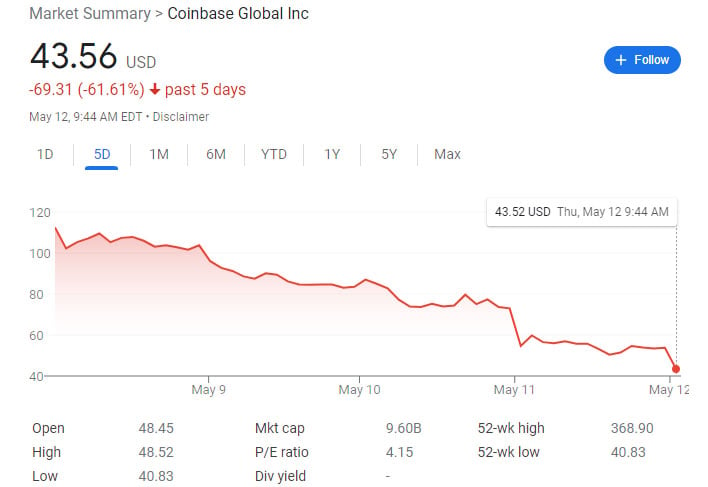 Shares of Coinbase hovered around $73 at the end of Tuesday, the day the exchange posted its latest quarterly earnings, and fell to under $55 by the next morning. And over the past five days, its stock price is down more than 61 percent. If going back a full year, shares of Coinbase are down nearly 85 percent.
It's not just the exchange that is taking a hit. A whole bunch of cryptocurrencies have fallen in value recently, with some steep declines in the past 24 hours. Here are a few examples...
At the beginning of the week, we wrote about Bitcoin losing half its value since peaking just six months ago. It has continued to declined, and as often the case, it has having a ripple effect in the cryptocurrency market as a whole.
In the past month, the cryptocurrency market as a whole has plummeted by more than $1.4 trillion, according to CoinMarketCap. Crypto investors appear to be dumping their digital currencies. That's not to say the market won't rebound—cryptocurrency has always been highly volatile—but who knows how it will play out.

One interesting side note is that it's conceivable the crypto crash will lead to an influx of graphics cards on eBay, Craigslist, and various other marketplaces. Bitcoin is not really mined with GPUs these days, but coins like Ethereum still are, which are often then exchanged for Bitcoin.
We've already seen prices and inventory levels of PC graphics cards improve over the past several weeks, and perhaps the situation will get even better as the cryptocurrency market continues to spiral. We shall see.