What goes up must come down, but when it comes to cryptocurrency, and Bitcoin in particular, wild up and down swings feel like normal occurrences (it was just a short while ago when Bitcoin and Ethereum fueled a cryptocurrency explosion to a $2 trillion valuation). And that is what Bitcoin investors are hoping is occurring right now—just a normal downward swing, as the digital currency comes crashing below the $30,000 mark for the first time in a month.
At the time of this writing, Bitcoin is trading at $29,694.34. That's down from around $31,000 yesterday, and less than half of where Bitcoin peaked at in April of this year, when it topped $60,000. Will it go back up? Probably, but for Bitcoin investors, there are definitely reasons to be cautious, outside of the normal volatility associated with cryptocurrencies. 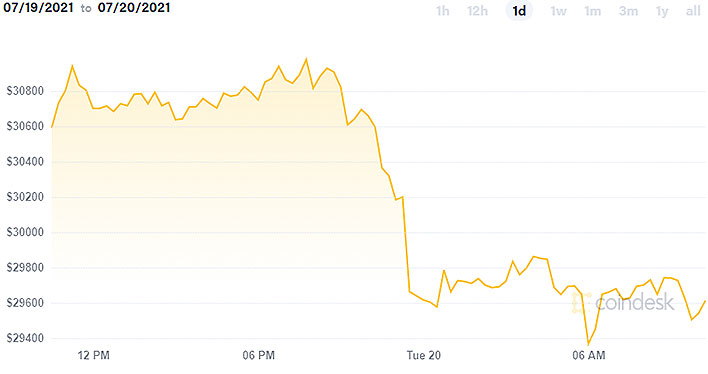 For one, China is cracking down on cryptocurrency in general. As such, crypto miners recently dumped a bunch of used GeForce RTX 3060 cards on eBay for relatively cheap (compared to what they had been selling for), as well as ASIC hardware, the latter of which is what Bitcoin miners use these days. But it's not just China.

Malaysian police recently seized and then steamrolled 1,069 ASIC mining rigs after discovering that miners had illegally tapped into a power grid to steal electricity for their operations. Talk about sending a strong message. In addition, six people were arrested, jailed, and fined (but hey, at least they weren't steamrolled).

Tighter regulations in various territories could affect Bitcoin's value, too. For example, US Treasury Secretary Janet Yellen said lawmakers must "act quickly" to construct and adopt new rules on stablecoins.
"Bringing together regulators will enable us to assess the potential benefits of stablecoins while mitigating risks they could pose to users, markets, or the financial system," Yellen said in a statement. "In light of the rapid growth in digital assets, it is important for the agencies to collaborate on the regulation of this sector and the development of any recommendations for new authorities."
It's not just Bitcoin that is seeing its value shoot downward. As Bitcoin goes, other cryptocurrencies often follow. In this case, the meme cryptocurrency Dogecoin is down more than 5 percent to $0.16 (after Dogecoin co-founder Jackson Palmer essentially called cryptocurrency a scam driven by shady wealthy people), while Ethereum dropped more than 3 percent to $1,755.99. Ethereum peaked at nearly $3,900 just over two months ago.
The next few months will prove interesting for Bitcoin and other cryptocurrencies as new rules and regulations take form.