NASA recently shared the largest image ever assembled from the Hubble Space Telescope on its Instagram feed. The image of the Andromeda galaxy was captured seven years ago, but is still just as breathtaking.

Hubble has taken somewhat of a backseat since the James Webb Space Telescope (JWST) began taking its first high resolution images of deep space last month. The first images shared by NASA from the newest space telescope were truly awe inspiring. But the space agency does not want you to forget one of its predecessors, the Hubble telescope, which has been inducing oohs and ahhs with its photos of space since its launch and deployment by the space shuttle Discovery in 1990.

One of the images that enamored viewers seven years ago, was recently shared by NASA on its Instagram feed once again. The image captured a sweeping bird's-eye view of the Andromeda galaxy (M31), and is the sharpest large composite ever taken of the Milky Way's neighbor. Even though Andromeda resides over 2 million light-years away, Hubble showed its photographic prowess to resolve individual stars in a 61,000 light-year-long stretch of the galaxy's pancake-shaped disk. 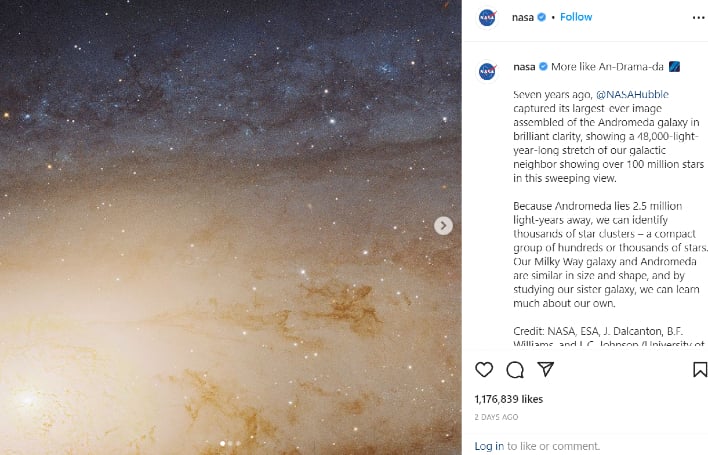 In a blog post on NASA's website, it likened taking the picture to trying to photograph the beach and resolving individual grains of sand. The panoramic view is host to over 100 million stars, with some being in thousands of star clusters seen embedded in the disk. The image provided the first data to reveal populations of stars in context to their home galaxies.

In a more recent photo from Hubble, the space telescope captured an image of multiple galaxies. The most noticeable galaxy, located in the upper right, is LEDA 58109. It is flanked by two galactic objects to its lower left, including a galaxy with an active galactic nucleus (AGN) named SDSS J162558 14+435746 which partially obscures another galaxy, SDSS J162557 25+435743.5, which seemingly pokes out to the right behind the AGN.

While galaxy classification can sometimes be presented as a dichotomy, spiral and elliptical, NASA says this recent image from Hubble showcases just how diverse galaxies can be, with some defying a classification of either spiral or elliptical.

JWST will undoubtedly continue to produce images of deep space that will help reveal new secrets to the Universe in which we reside. But do not discount Hubble from being able to continue capturing amazing and detailed images just yet. The tried and true telescope still has plenty to offer, and we look forward to partaking in all of its findings.