The folks at Backblaze, a cloud storage and data backup company located in San Mateo, California, published a report comparing the failure rates of solid-state drives (SSDs) and hard disk drives (HDDs), and you might be surprised by the results. Or maybe not, if you were expecting SSDs to emerge as the clear winner among the two storage mediums.
Backblaze is in a unique position to offer insight into how different storage types, models, capacities, and brands fare, and the company regularly publishes reliability reports based on its own experiences. Of course, the data is limited in scope to the storage models it employs, and in that regard, it's somewhat of a hyper-anecdotal accounting. But it's also one of the best representations of PC storage out there, with actual data culled from thousands of storage drives.
In its "2022 Midyear Report," Backblaze focused on how its shift to SSDs for boot chores has fared in comparison to using HDDs for the same tasks.
"Boot drives in our environment do much more than boot the storage servers: they also store log files and temporary files produced by the storage server. Each day a boot drive will read, write, and delete files depending on the activity of the storage server itself," Backblaze explains.
Up until the fourth quarter of 2018, Backblaze used HDDs exclusively for boot drives. But since then, all new servers have been outfitted with SSDs. It's also replaced failed HDDs with SSDs since then. As of the end of June of this year, there were 2,558 SSDs in its storage servers.
Several hundred of the SSDs are of the M.2 variety, though the bulk of SSDs employed are 2.5-inch SATA drives. They represent a mix of models from Crucial, Dell, Micron, Seagate, and WDC. So, what does the data bear out?
For one thing, Backblaze says users can "call off the dogs" in regard to the high failure rate observed its 250GB Crucial SSD model (CT250MX500SSD1) during its previous SSD report. At the time, there was a "very limited amount of data" to analyze, but "now that our Crucial drives have settled in, we've had no failures in either Q1 or Q2." 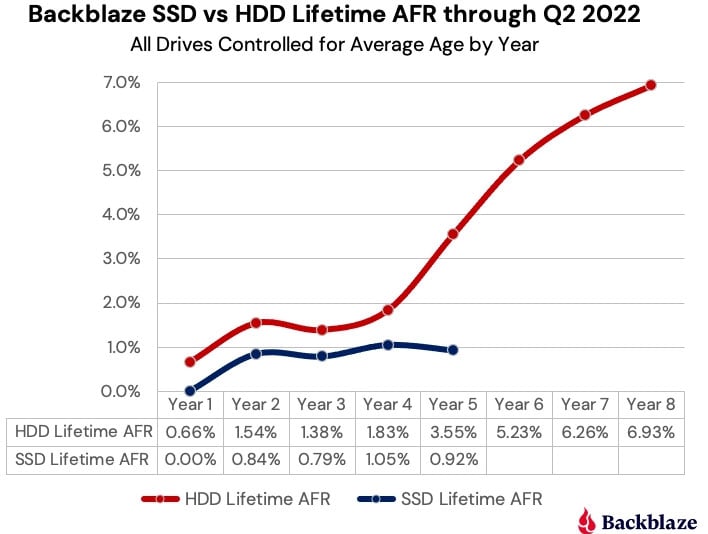 Getting right to the point, it's the annualized failure rates that are of most interest. As you can see in the above graph, HDDs and SSDs exhibit the same curve throughout the first few years of activity, with SSDs failing a little less often—by the fourth year, HDDs had exhibited a 1.83% failure rate to compared to 1.05% for SSDs.
At the 4-year mark, Backblaze wasn't sure if the SSD failure rate would continue to follow the same curve exhibited by HDDs, flatten out or fall somewhere in between. With another year of data in the books, it's looking like the failure rate has indeed flattened out. The failure rate actually dropped slightly, going from 1.05% after four years to 0.92% in the fifth year. Meanwhile, the failure rate of HDDs went from 1.83% to 3.55% during the same time period, and then kept climbing to nearly 7% after eight years of service.
"At this point we can reasonably claim that SSDs are more reliable than HDDs, at least when used as boot drives in our environment. This supports the anecdotal stories and educated guesses made by our readers over the past year or so. Well done," Backblaze notes.
So in this comparison, SSDs emerge as the clear winner, though not without caveats. For one, SSDs are still relatively new to Backblaze's stable, resulting in less data to parse compared to its HDDs. This comparison also represents a very limited sample of SSD models. And of course, if you're looking for a bulk storage solution, HDDs are still way bigger at the top end (WD recently unpacked a 22TB HDD) versus consumer SSDs and more cost effective (per gigabyte).

Still, the latest storage report provides an interesting examination based on actual usage. It's also not surprising that SSDs, at least in the relatively short term, fail less often than HDDs. SSDs have the advantage of no moving parts, whereas HDDs are quite mechanically intricate in their design.
Backblaze says it will continue to collect and share SSD data on a regular basis, adding that it is "highly certainly that the failure rate of SSDs will eventually start to rise." When and by how much are questions to be answered another day.