It's a technical marvel that mechanical hard disk drives (HDDs) don't give up the ghost way more often than they do. Some models are more prone to premature failure than others, of course, but overall these storage devices with their moving parts and platters have proven surprisingly resilient. One model in particular has been especially impressive in the employ of Backblaze, a cloud storage and data backup company that recently celebrated its 15th anniversary.

Even if you don't utilize Backblaze's services, there's a good chance you've heard of the company. That's because a long time ago, it decided to start collecting, storing, and sharing statistics about the HDD models it uses to store customer data.
Backblaze's quarterly and annual HDD reliability reports, while not perfect, provide insight into a handful of storage models that the public is typically not privy to. This sometimes yields a few surprises, as is the case in Backblaze's Q1 2022 report containing failure rates for over 207,000 HDDs. One of the models that stands out is an older 6TB from Seagate (ST6000DX000).
"The 6TB Seagate (model: ST6000DX000) continues to defy time with zero failures during Q1 2022 despite an average age of nearly seven years (83.7 months). 98% of the drives (859) were installed within the same two-week period back in Q1 2015. The youngest 6TB drive in the entire cohort is a little over four years old," Backblaze states in its report.
That's encouraging, especially when an older reliability report from several years ago highlighted some disturbing failure rates with a couple of Seagate's 4TB models. 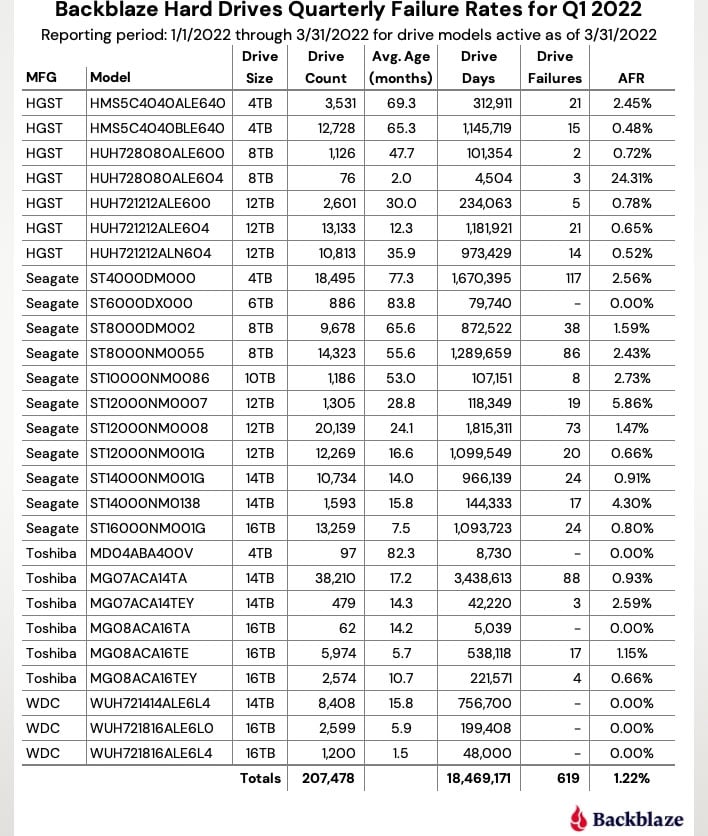 Seagate's 6TB model isn't the only standout in the latest HDD reliability report. The stats also show that nearly 100 of Toshiba's 4TB MD04ABA400V models have been holding strong for nearly as long with zero failures as well. And some younger models are off to a great start, including Toshiba's 16TB MG08ACA16TA and over 10,000 Western Digital HDDs (14TB and 16TB models) that have yet to experience a failure of any kind.
What's also encouraging is that larger capacity HDDs appear to be doing well for the most part, especially 16TB models. The average drive age muddies the analysis, but given that bulk storage needs continue to grow, it's nice to see that bigger capacity models are proving relatively reliable so far.