The powerful pocketable AYANeo 2 gaming handheld will start to be distributed from September, with mass shipments starting in October. We highlighted this second generation design, one of a growing throng of AYANeo devices, back in May when the device designers announced it would be the “first AMD 6800U Windows handheld in the world.”
This is going to be an important device for AYANeo, as it is aiming squarely to surpass the popular Steam Deck with its form factor and specs. Several contenders have been looking with envy at how the Steam Deck has captured the headlines and hearts of PC gaming fans wishing to go portable. The Steam Deck is going to be tough to lay a glove on though, with its combination of hardware including a custom AMD APU, the support of Valve, and the all-important pricing.
Key to the chances of success for the AYANeo 2 are that it will sport some of the most modern specs in a handheld. It is touted to come with an AMD Ryzen 7 6800U APU. This processor features AMD’s Zen 3+ cores in an 8C/16T configuration. CPU clock speeds will boost as high at 4.7 GHz, which is quite astounding for a handheld. Compare these specs to the Steam Deck CPU which features AMD Zen 2 cores in 4C/8T configuration, boosting as fast as 3.5 GHz. 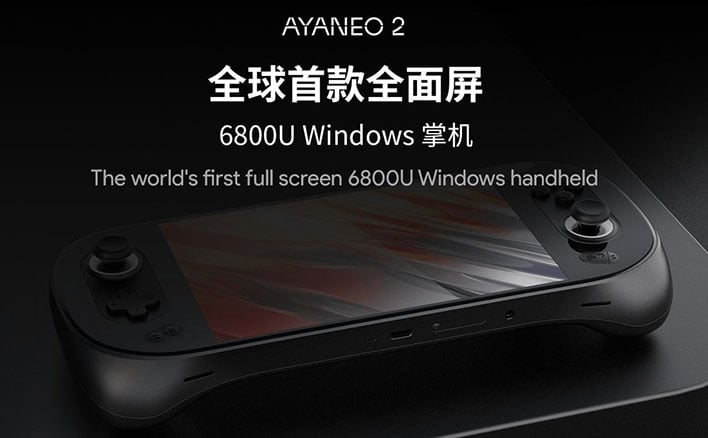 Another vital specification for a handheld gaming device is the GPU. Valve got ahead of the pack with its custom AMD Van Gogh APU, which offered a better balance of CPU and GPU processing for gaming than most off-the-shelf SoCs. However, the AYANeo can comfortably grab the lead in late 2022 with its GPU core configuration. Here, the AYANeo has 12x RDNA2 CUs running at up to 2.2 GHz, vs the Steam Deck’s 8x RDNA2 CUs running at a maximum 1.6GHz.
In other specs the two handhelds trade blows, with similar 7-inch IPS screens, similar LPDDR5 RAM configurations, and form factors. With the newer and more powerful AYANeo 2 there could be a worry about battery life, and it is a Windows 11 handheld, while Valve’s effort is currently a primarily Steam OS device, with Windows support a work-in-progress.
The pricing of the AYANeo 2 will be a crucial decision, but we don’t have any information on it at the time of writing. Yes, it will be one of the most powerful handhelds around, but the designers should be careful with the price premium they are considering. Previously, AYANeo devices haven’t been very price competitive.

During the five-hour presentation featuring the AYANeo 2 news on Sunday, we also heard about the launch of the AYANeo Air, and got an overview of the full product line with which AYANeo hopes to dominate the market in the coming months.