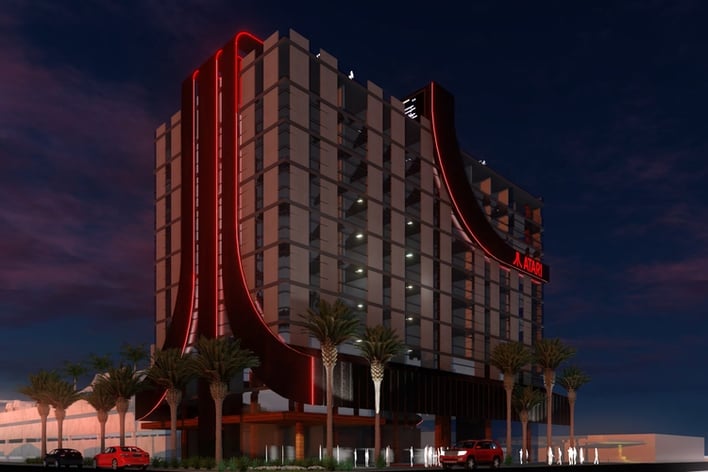 When it comes to modern gaming, we typically think of hardcore PC gaming rigs, or consoles from the likes of Microsoft, Sony, and Nintendo. Atari doesn't typically enter the discussion due to its long absence from the gaming market. The fact that the company's VCS retro gaming console has been delayed multiple times hasn't helped its mindshare with the public either.

Despite this, the company is pushing forward with what is quite an ambitious undertaking -- Atari-branded gaming hotels. The company says that its goal is to deliver "one-of-a-kind video game-themed destination(s)" for its patrons.

The hotels will provide the ultimate in gaming experiences when you're away from home -- so you won't have to lug your PlayStation 4 around like this poor fella that got busted in an airport. Atari says that its hotels will provide "fully immersive experiences for every age and gaming ability" and will even include virtual reality and augmented reality hardware for guests. If that isn't enough, Atari claims that some of its hotels will even be equipped to host eSports gaming tournaments.

“Atari is an iconic global brand that resonates with people of all ages, countries, cultures and ethnic backgrounds and we cannot wait for our fans and their families to enjoy this new hotel concept," said Atari CEO Fred Chesnais.

“When creating this brand-new hotel concept, we knew that Atari would be the perfect way to give guests the ‘nostalgic and retro meets modern’ look and feel we were going for. Let’s face it, how cool will it be to stay inside an Atari?!” added Napoleon Smith III.

Development of the Atari Hotels franchise will be carried out by GSD Group and Napoleon Smith III. True North Studio is tasked with developing the first hotel in Phoenix, Arizona (groundbreaking begins later this year). Eventually, there will be additional hotels in Las Vegas, Denver, Chicago, Austin, Seattle, San Francisco, and San Jose.

The Atari Hotels announcement comes as the company struggles to ship its VCS console. First announced way back in 2017, the VCS is now scheduled to launch in spring 2020 (barring any more unforeseen delays). The console is powered by an AMD Ryzen Embedded APU and will run native games and Atari’s back catalog of classic titles.