There have been a few pricing leaks related to Intel's upcoming Alder Lake CPUs, but if you're planning to build a PC around a 12th Gen Core CPU, there are other components to consider as well. Such as DDR5 memory (or DDR4, if going that route) and a Z690 motherboard. Mobo makers will be ready to go at launch, and at least one vendor has posted pricing for what ASUS will have to offer.
Right out of the gate, Intel's Z690 chipset will be the only one in town that supports Alder Lake. It will bring with it a new LGA 1700 socket, and either DDR5 or DDR4 memory slots, depending on the specific model you choose. Alder Lake supports both memory types, just not on the same motherboard (so pay extra close attention to the spec sheet).
A few weeks ago, several purported ASUS Z690 motherboards appeared on the Eurasian Economic Commission (EEC) website. ASUS had registered no less than 16 models, including seven with DDR5 memory slots and nine with DDR4 memory slots, the latter of which are designated with "D4" in the model name.
That gave us a look at the upcoming lineup from ASUS, but nothing in regards to pricing. Canadian retailer PC-Canada has now filled in that information gap, with some early listings... 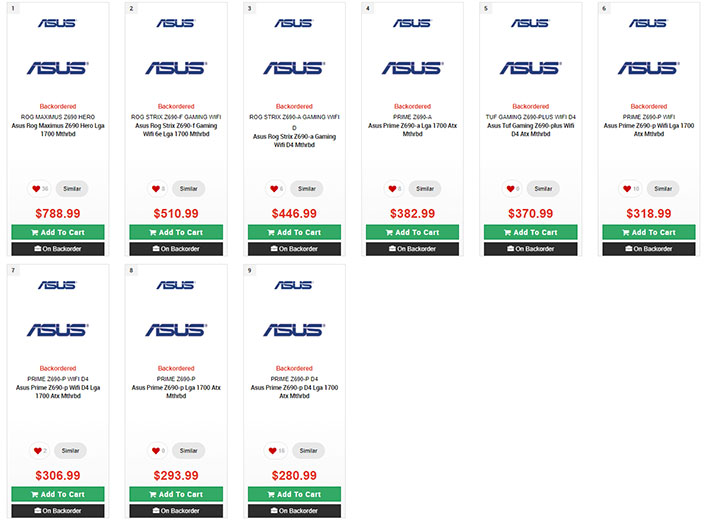 These listings are in Canadian currency, so let's do some quick and dirty conversions to US dollars, shall we? Here we go...
Bear in mind that pricing from one territory to the next hardly ever follows a straight currency conversion. Secondly, these are early listings from a single retailer, though PC-Canada does actually let you add them to your cart and go through the checkout process—it essentially amounts to a preorder.
To put the top model into perspective, the ROG Maximus XIII Hero (Z590) is listed on sale at Amazon for $460.99 (down from $499.99). So based on these early listings alone, the Z690 Hero could end up costing more. Or maybe not—if comparing to prices at the same vendor, PC-Canada lists the ROG Maximus XIII Hero for CA$854.99, which converts to $680.40.
The ROG Maximums Z690 Hero is actually cheaper than the Z590 model at the same retailer, which is certainly interesting.
Clarity will come relatively soon, anyway. Rumor has it Intel will formally introduce its Alder Lake lineup later this month, with retail availability scheduled for sometime in November. In the meantime, start saving your pennies if you're planning to upgrade.