If you are wondering where things stand with Alder Lake, in terms of timing, the no-fun answer is we don't know precisely. However, we do know Intel will be launching Alder Lake before the end of the year, and rumor has it, the initial lineup will be performance desktop SKUs aimed at enthusiasts. Alder Lake is also bound for laptops, though, and new leak suggests those SKUs are not far off.
Alder Lake represents Intel's earnest attempt to essentially go all-in with hybrid computing. It is a heterogeneous architecture built around a mix of high performance Golden Cove cores and power efficient Gracemont cores, though a few of the leaks up to this point have suggested that some SKUs will be entirely comprised of Golden Cove silicon. We'll see.
Intel offered up a deeper dive into Alder Lake during its Architecture Day 2021 event, and there is quite a bit to digest. Summed up, though, Intel is aiming to deliver a "significant IPC boost at higher power efficiency," to drive the "next decade of compute" platforms. This will serve its full range of laptops, desktops, and data center lineups. 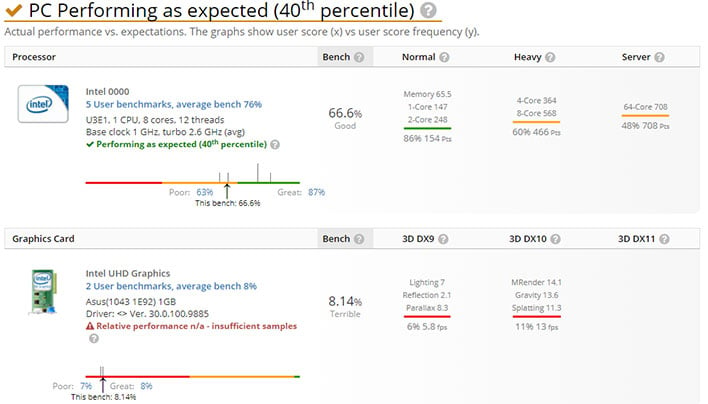 While we wait to see what emerges, a new entry at UserBenchmark highlights an unreleased ASUS ViviBook laptop configuration with a processor that is undoubtedly another leaked Alder Lake-P part. It is only identified as an "Intel 0000" chip, but the specifications highlight eight cores and a dozen threads, with a 1GHz base clock and 2.9GHz turbo frequency (average).
That tells us this particular SKU features four Golden Cove cores with Hyper Threading support and four Gracemont cores without Hyper Threading. So it works out like this: 4 big cores + 4 threads + 4 small cores + 0 threads = 8 combined cores and 12 threads (each core also counts as a thread). Intel has said Alder Lake will top out at up to 16 cores and up to 24 threads, though it is not clear if mobile Alder Lake-P parts will go quite as high.

There is not a whole lot to be gleaned about performance, other than UserBenchmark determining it is "performing as expected." There's too much we don't know, like the type and speed of the RAM (Alder Lake supports both DDR5 and DDR4 memory), how early of an engineering sample this is, and if the clocks are accurate (the average 2.6GHz turbo frequency is not likely its peak speed).
What is more interesting here is that an Alder Lake-P processor is showing up in a benchmark as part of a name-brand laptop setup, as opposed to a reference notebook or something like that. It suggest a launch is close. Whether we see it this year or early next year, though, only Intel knows at the moment.