If you have a juicy secret you're just dying to tell someone, you better not whisper it ASUS, not if you want it to remain a secret. For example, let's say your name is "NVIDIA" and you are readying a new addition to your GeForce RTX 30 series, like a GeForce RTX 3050 Ti. Then let's say you gave ASUS a heads up, which in turn plastered the new SKU on its website in public view. Oops!
In case you have not guessed it, that is not a hypothetical situation. NVIDIA is rumored to be prepping a GeForce RTX 3050 Ti, and short of a direct confirmation from Team Green, ASUS appears to have let the cat out of the bag in reference to its 2021-model TUF Dash F15 gaming laptop—the unreleased SKU appears in the laptop's specification list.

ASUS is not the only one, though. Lenovo did the same thing in December, revealing several unreleased GeForce RTX 30 series SKUs in a support document for one of its Legion desktops.  As for for ASUS, however, here's a look at the secret-busting product page... 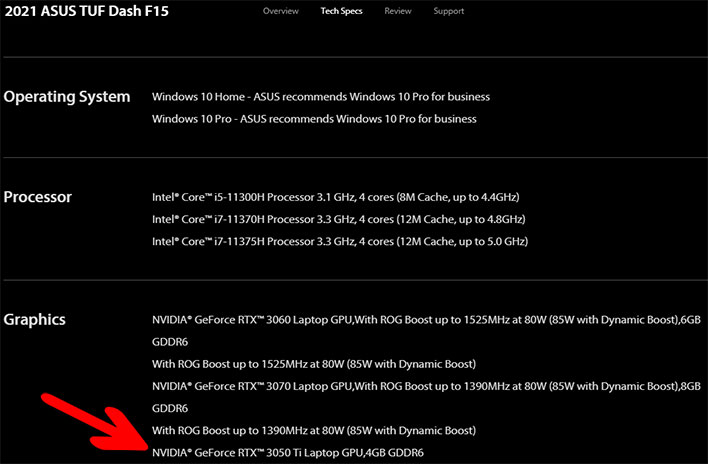 There's not a whole lot in the way of telling details, though ASUS does list the mobile variant as having 4GB of GDDR6 memory. Rumor has it the GeForce RTX 3050 Ti will also sport a 128-bit bus and a 60W power profile. The TGP might depend on the specific variant, though, as NVIDIA has given its hardware partners leeway in how they configure its mobile Ampere GPUs.
We're also happy to see that this is another RTX model. It remains to be seen if NVIDIA will release any Ampere GPUs that lack dedicated hardware for real-time ray tracing, or if that is now a thing of the past.

In any event, it looks like the TUF Dash F15 will come in a variety of configurations spanning a range of price points, from a budget-oriented setup built around the GeForce RTX 3050 Ti and Intel Core i5-11300H, to more powerful hardware combinations, culminating in a GeForce RTX 3070 paired up with a Core i7-11375H.
ASUS will also offer 8GB and 16GB RAM options (the laptop supports 32GB max), and 512GB and 1TB NVMe SSD configs. Likewise, there are multiple screen choices as well. Two of them sport a 1920x1080 resolution, one with a 144Hz refresh rate and the other with a 240Hz refresh rate. Then there is a third option, which bumps the resolution up to 2560x1440, with a 165Hz refresh rate. All three are 15.6-inch IPS screens.
No word yet on when the latest TUF Dash F15 models will be available or how much they will cost.