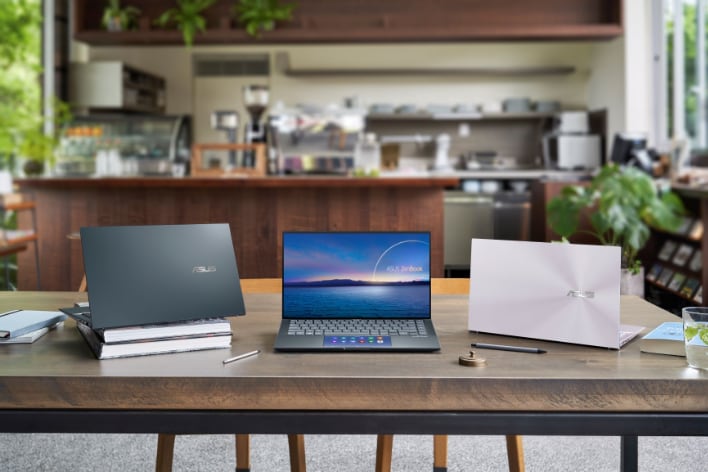 Today is Intel's big day to launch Tiger Lake, its 11th generation Core architecture We’ve already covered Tiger Lake in great detail during Intel’s Architecture Day, so now’s the time for the company’s OEM partners to takeover and show what they can do with it. ASUS is among the many OEMs that has answered the calling, and the company has announced over a dozen new laptops and convertibles featuring Tiger Lake.

Kicking things off is the ZenBook 14 (UX435), which includes 11th generation Core i5 or Core i7 processors along with NVIDIA’s newly announced GeForce MX450 discrete GPU (2GB GDDR6). The laptop can be configured with either 8GB or 16GB of LPDDR4-4266 memory and up to a 1TB PCIe NVMe SSD. If you wish, you can also choose to add Intel Optane Memory H10 to the equation for an added performance boost.

Given the 14 in its name, it should come as no surprise that there’s a 14-inch display running the show. There are two display options, both of which feature 60Hz FHD IPS panels. One panel features a touch screen, while the other is non-touch with an anti-glare coating. There are thin bezels all around which makes for a more immersive experience for users.

There also another display panel on the machine, however, in the form of the 5.65-inch ScreenPad. This color touch screen serves as your trackpad, but can also enhance your productivity by giving you access to ASUS apps including a calculator, music player, and other useful utilities.

Given that this is a Tiger Lake platform device, it features dual Thunderbolt 4 ports, plus a USB 3.2 Type-A port for legacy devices. You’ll also find a HDMI 2.0 port, a microSD reader. Also along for the ride is a Windows Hello-capable webcam, Harman Kardon audio and support for both Cortana and Alexa voice assistants with an array microphone.

Moving on, we come to the ZenBook Flip S (UX371), which is a Tiger Lake (Core i7, 8GB/16GB LPDDR4-4266) convertible with a 13.3-inch display and 360-degree ErgoLift hinge. Base systems come with a Full HD NanoEdge touch screen, while you can upgrade to a sweet 4K UHD OLED touch screen. Graphics are handled by the integrated Intel Iris Xe graphics rather than a discrete NVIDIA GPU, but otherwise port layout looks similar to the ZenBook 14 with both Thunderbolt 4 and USB 3.2 Type-A ports at your disposal.

The ZenBook S is an ultraportable notebook that brings a slightly unorthodox 13.9-inch 3:2 aspect ratio display (3300x2200). It features an all-metal unibody design and up to a 11th generation Core i7 processor with 16GB of RAM and a 1TB SSD. A 67 WHr battery provides up to 12 hours of runtime during your busy workday.

While there are slews of other ASUS laptops that have been announced today, the last one that we’ll discuss is the ExpertBook B9. ASUS says that this is among the lightest 14-inch business notebooks in its class, and it is available with either Core i5 or Core i7 Tiger Lake power and Iris Xe graphics. The 14-inch anti-glare display features a 1920x1080 resolution and a 400-nit brightness rating.

Up to 32GB of LPDDR4x-4266 memory can be configured, and RAID-0/RAID-1 is available as an option (up to dual 2TB SSDs). The 66 WHr battery lasts all day along and supports fast charging (takes you from 0 to 60 percent in just 39 minutes). The ExpertBook B9 also supports a MIL-STD 810H rating for durability.

ASUS has not yet announced pricing for its new Tiger Lake-equipped notebooks, but they will all be available in October, with the exception of the ZenBook 14 which bows in November.