In case you missed it, NVIDIA earlier this week refreshed its mobile GPU lineup up with a couple of new Super models, the GeForce RTX 2080 Super and GeForce RTX 2070 Super, both with support for an enhanced version of the company's Max-Q technology. What about the rumored GeForce RTX 2060 Super for mobile? NVIDIA did not announce such a thing, though a slide that was put together by ASUS suggests it might still be coming.
At present, NVIDIA's mobile GPU lineup in RTX territory consists of five primary SKUs. They include the following...
Base and boost clocks can vary depending on Max-Q handles things, but what you are looking at above are the max clocks in each category.
As it relates to the GeForce RTX 2060 Super that has not (yet) launched in mobile form, ASUS shared a slide with HardwareUnboxed that outlines the part. Have a look... 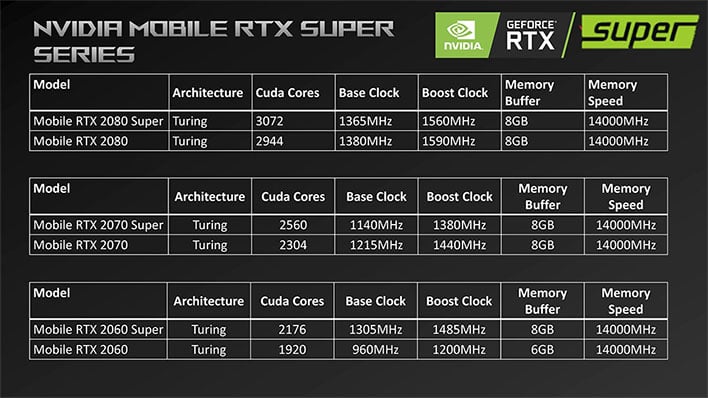 According to the above slide, the GeForce RTX 2060 Super was to debut with 2,176 CUDA cores clocked at 1,305MHz (base) to 1,485MHz (boost) at the upper thresholds, and 8GB of GDDR6 memory. So, it would have more CUDA cores, more memory, and faster clocks compared to the regular GeForce RTX 2060 for mobile.
HardwareUnboxed discusses this in a video posted to YouTube, starting at the 9min42 sec mark. NVIDIA's stance, however, is that a GeForce RTX 2060 Super for mobile is not part of this launch. What exactly does all this mean?
There a few scenarios. The most likely one in our opinion is that we will see a GeForce RTX 2060 Super mobile GPU added to the mix at a later date—it's not unusual for NVIDIA (or AMD or Intel) to stagger product launches.
Another possibility is that the GeForce RTX 2060 Super was originally intended to launch alongside the two other GPUs, hence why ASUS worked up a slide that included it, but was pulled out of mix at the 11th hour for whatever reason.
Finally, ASUS could have simply erred in making its slide, though we find this to be the least plausible. Those numbers had to come from somewhere, and it is highly unlikely that ASUS just made them up or took a stab in the semi-dark.
All we can do at this point is wait and see what develops.