If you find scars to be sexy, wait until you catch a glimpse of the one ASUS is brandishing. As a followup to the version it trotted out at the Consumer Electronics Show (CES) a few months ago, ASUS has unveiled the ROG Strix Scar 17 Special Edition (SE) with upgraded specifications, including Intel's top mobile processor, the Core i9-12950HX.

The Core i9-12950HX headlines Intel's recent Alder Lake-HX launch. Those chips are physically bigger and pack more features than Alder Lake-H, bringing desktop class performance and capabilities to mobile. They're primarily intended for mobile workstations, though Intel is also targeting gamers and enthusiasts with Alder Lake-HX.
Curiously, ASUS lists the Core i9-12950HX as a 65W processor in its press release, even though it's a 55W chip. It's possible ASUS dialed up the power, though we suspect it's just a typo. Either way, you're looking at a 16-core/24-thread chip (8 P-cores with Hyper Threading and 8-E cores) clocked at up to 5GHz, with 30MB of L3 cache. 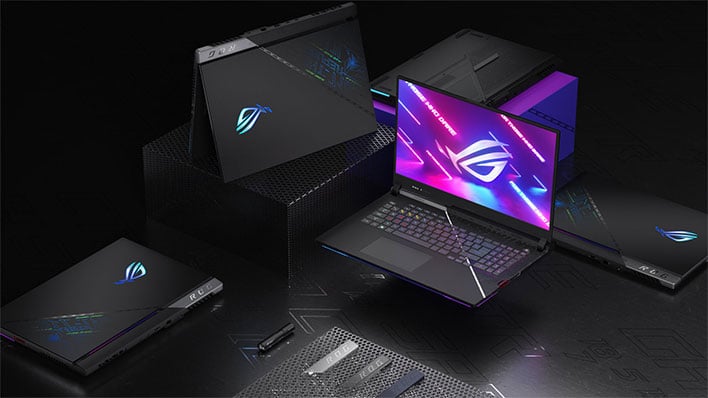 Rounding out the hardware is a pair of 16GB DDR5-4800 SO-DIMMs for 32GB of total memory (expandable to 64GB), and a pair of 2TB NVMe Gen 4 SSDs in RAID 0 for 4TB of fast storage. Wi-Fi 6E and Bluetooth 5.2 are on tap as well, along with a chiclet keyboard with per-key RGB, Dolby Atmos support, and a 90W battery.
For the I/O, you're looking at the following... 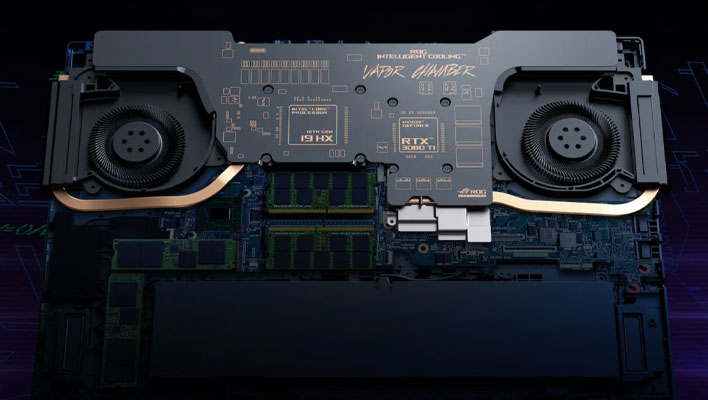 "ROG’s engineers had to get creative in order to accommodate all this high-powered gear. Starting with the thermal interface material, the Scar 17 SE is the first ROG laptop to use Thermal Grizzly’s Conductonaut Extreme liquid metal on both the CPU and the GPU," ASUS says. "Conductonaut Extreme is an ultra-high performance compound that can drop CPU temperatures by up to 15°C compared to traditional thermal pastes, and we’ve applied it to the GPU as well to keep temperatures as low as possible across the board."
ASUS also says the ROG Scar 17 SE employs a massive custom vapor chamber that covers nearly half of the motherboard (48.8%).
This is a little bigger and heavier than the ROG Flow X16 that was announced at the same time—the ROG Strix Scar 17 SE measures 15.6 x 11.1 x 0.92-1.11 inches and weighs 6.6 pounds. There's no mention of price, though a peek around the web suggests it will start at $3,499. Not exactly cheap to be sure, though you could try your hand at winning one.