A listing at the FCC confirms ASUS is prepping a new ROG Strix Scar 15 gaming laptop with the model designation G533Z. Unfortunately, much of the good stuff is being kept confidential, though the listing does at least present a sketch of the laptop's underside. More interesting, however, is what the upcoming laptop is rumored to wield.
Rumor has it the G533Z will be kitted with an AMD Ryzen 9 6900HX processor and an NVIDIA GeForce RTX 3080 Ti mobile graphics chip. Neither of those slices of silicon officially exist yet, though multiple leaks suggest they are coming. It's just a matter of when, and with ASUS seeking FCC approval on its upgraded ROG Strix Scar 15, hopefully they're not too far off in the distance. 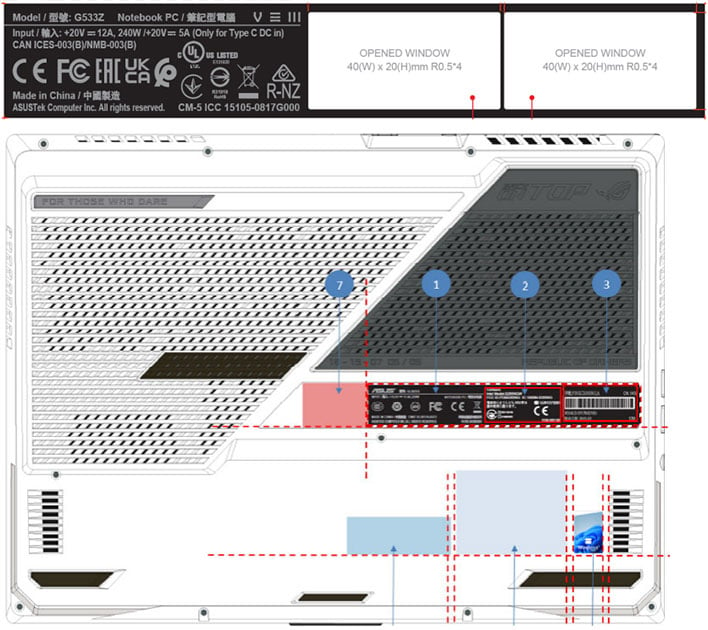 There's not a lot to be gleaned from the listing itself, other than the product ID (3568A-G533Z) and the FCC ID (MSQG533Z). Assuming the design of the chassis remains the same, customizable RGB lighting will give the laptop an under glow by way of a light bar. That's in addition to RGB lighting on the lid and the backlit keyboard, controllable via ASUS Aura Sync.

The rumored specs are far more interesting. Starting with the GPU, the GeForce RTX 3080 Ti is set to takes it place as NVIDIA's flagship mobile GPU. A recent Geekbench listing highlighted an HP Omen laptop with the unreleased GPU, which showed it having 58 compute units and 7,424 CUDA cores. It's also expected to debut with 16GB of GDDR6 memory, and possibly a 1,395MHz GPU clock.
As for the CPU, the Ryzen 9 6900HX is said be a Rembrandt-H part based on Zen 3+, manufactured on a 6-nanometer process and sporting an 8-core/16-thread configuration. It's also expected to have 16MB of L3 cache and onboard RDNA 2 graphics.
According to the folks at MyLaptopGuide, the upgraded ROG Strix Scar 15 will also boast a generous 32GB of DDR5-4800 memory, a 1TB NVMe SSD, and a 15.6-inch QHD display with a 165Hz rate. If all that's true, this thing is going to be a screamer.