In the realm of AMD graphics hardware, Navi 21 XTX is its big gun, though it has a GPU that is even better. That would be the Navi 21 XTXH. While they are essentially the same, the "H" model is specially binned to offer even better performance, and AMD's hardware partners have been implanting it into premium tier cards. Case in point, the new ASUS ROG Strix LC Radeon RX 6900 XT is powered by a Navi 21 XTXH GPU, just like PowerColor's Radeon RX 6900 XT Liquid Devil Ultimate.

Further cementing its niche status, the ROG Strix LC Radeon RX 6900 XT sports a hybrid cooling solution. A full-coverage cold plate brings the chill of liquid to the GPU die and memory, which flows through miles of tubing (slight exaggeration, it's 600mm long) that enables users to pop this into an extended ATX (E-ATX) form factor chassis. 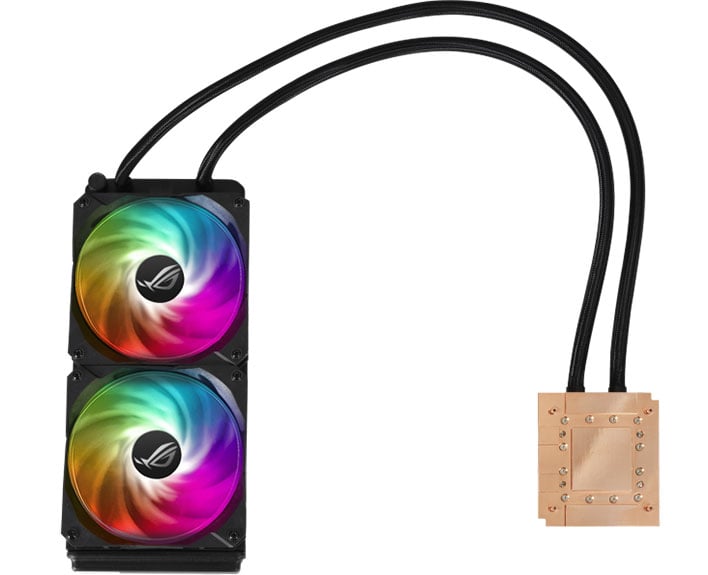 The card is attached to a 280mm radiator with dual 120mm RGB fans that ASUS says are optimized for high CFMs and static pressure. It also features a custom, blower-style air cooling shroud with a single fan to expel hot air right out of the case. The card itself measures a reasonable 27.7 x 13.1 x 4.36 centimeters (10.9 x 5.16 x 1.72 inches).
It's a 2.2-slot design, so it effectively takes up three expansion slots. In most setups, that's no big deal, considering that motherboards pack so many bits these days, like onboard Wi-Fi and much better quality audio than in the old days when discrete sound cards ruled the day.
Like the Navi 21 XTX found on the Radeon RX 6900 XT we reviewed, the "H" model boasts 5,120 stream processors, 320 texture mapping units, 128 render output units,  80 RT cores, and 16GB of GDDR6 memory tied to a 256-bit memory bus, for 512GB/s of memory bandwidth.
Stock clocks check in at 1,825MHz (base), 2,015MHz (game), and 2,250MHz (boost). ASUS goosed these a bit on the ROG Strix LC Radeon RX 6900 XT—in Gaming mode, the Game clock goes up to 2,375MHz and the boost clock is set at 2,525MHz. So that's a decent 275MHz gain at the top end, plus any additional frequency bumps you can squeeze out of the card on your own.
There's no mention of price or availability, but if we had to venture a guess, we'd say 'really expensive' and 'good luck finding'.