During a livestreamed launch event today, ASUS formally introduced the world to its ROG Phone 5, the latest version of its excellent gaming phone series. For this round, ASUS once again upped the ante, this time with several key upgrades, including up to a generous 18GB of LPDDR5 RAM and an even faster 144Hz refresh rate display.
Some of you reading this might be thinking the idea of a 'gaming phone' is little more than a gimmick. And to be fair, it sometimes can be, depending on the specific phone being talking about. But in our hands-on time with past ROG Phones like the ROG Phone 3 we reviewed last year, we have come to appreciate what ASUS and its Republic of Gamers division have accomplished.
What impresses us about the ROG Phone lineup is not just the cutting edge hardware, as is typical of a flagship phone, or even the refresh rate. It extends beyond those things to nifty features like Ultrasonic buttons and AirTriggers, and an ecosystem of complementary accessories that further separate the ROG Phone from a regular top-end Android device.
That's not to say it is for everyone, but for Android users who want a gaming-first smartphone, the ROG Phone line has consistently delivered. We'll find out soon enough if the ROG Phone 5 continues that trend, as we have one in-house that we are currently evaluating. Stay tuned for a full review soon. In the meantime, let's talk specs. 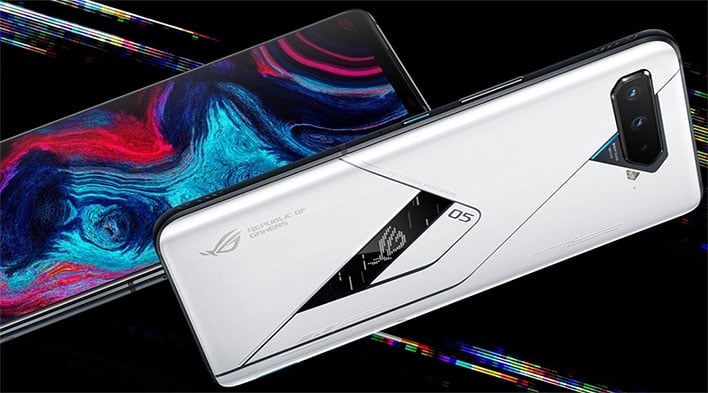 The ROG Phone 5 boats a 6.78-inch AMOLED display with a 2448x1080 resolution and support for 60Hz, 120Hz, and 144Hz refresh rates (variable when set to Auto). It also supports HDR10+, with a peak brightness of 800 nits. Combined with 111 percent coverage of the DCI-P3 color space and a 1,000,000:1 contrast ratio, the display certainly appears to be a highlight.
Not the least bit surprising, ASUS opted for a Qualcomm Snapdragon 888 processor to run the show. This is the fastest Snapdragon chip on the market, with a single Kryo 680 'prime' core clocked a 2.84Ghz, three Kryo 680 'performance' cores clocked at 2.4GHz, and four Kryo 'efficiency' cores clocked at 1.8GHz.
ASUS is offering different models of the ROG Phone 5, with varying amounts of LPDDR5 RAM and UFS 3.1 storage. Here's how it breaks down... 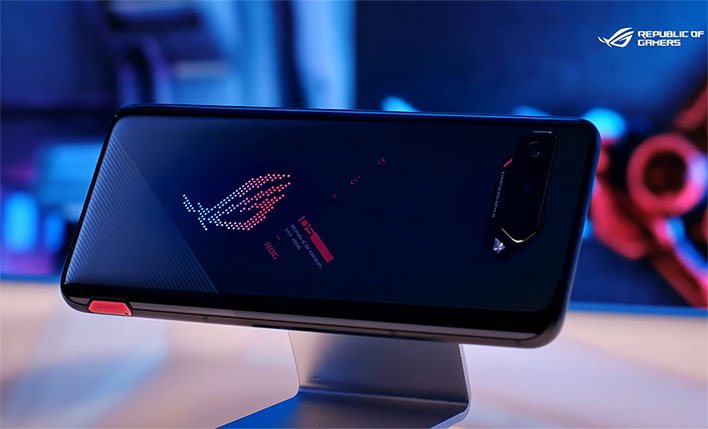 Color options will vary as well. The ROG Phone 5 Ultimate will be offered in a nifty new matte white dressing, the ROG Phone 5 Pro in glossy black, and the ROG Phone 5 in "Phantom Black" and "Storm White" colors. The overall design language is similar to past models, though on the rear, ASUS embedded a "cyberpunky" 8-bit retro pixel dot LED arrangement for added flair.
Beyond gaming, this is still a smartphone, and obviously camera performance is important. To that end, the ROG Phone 5 offers up a 24-megapixel shooter (f/2.45) on the front, and three cameras on the back consisting of a 64-megapixel main lens (f/1.8), 13-megapixel ultra-wide lens (f/2.4), and a 5-megapixel macro lens (f/2.0).

Once again, there's a beefy 6,000 mAh battery inside the latest ROG Phone. This time around, however, it's split into a pair of 3,000 mAh battery units utilizing a Middle Middle Tab (MMT) orientation. What this does is direct energy to the center rather than the ends, to reduce impedance to cut back on heat when charging. This also plays into a revised cooling system. It will be interesting to see what effect this has on battery life.
On the software side, the ROG Phone 5 is shipping with Android 11, skinned with the gaming-centric ROG UI. And of course the Armory Crate app will be present, giving users access to useful tweaks and customization geared towards gaming.
There is quite a bit more to cover, which we will get into in our review. As for pricing, it ranges from €799 to €1,299, which works out to around $950 and $1,540 in US currency. The ROG Phone 5 will be available this month, followed by the ROG Phone 5 Pro in April and the ROG Phone 5 Ultimate in May.