One of the highlights of Intel's upcoming 13th Gen Raptor Lake CPUs is that they are drop in compatible with existing Alder Lake platforms. This has the added benefit of facilitating some interesting performance leaks that look beyond the CPU. Case in point, a purported Core i5-13600K has been spotted on Geekbench in two different motherboards, one from ASUS and the other from ASRock.
The Core i5-13600K is a mid-range chip that's been making the rounds, with us having already covered leaked CPU-Z and Cinebench R23 scores for the unreleased CPU. To recap, it's a 14-core/20-thread processor with 6 P-cores and 8 E-cores. It performed fairly well in CPU-Z and Cinebench R23, save for a wonky single-core showing in the latter that's likely an error of some kind.
As for the ASUS versus ASRock showdown in Geekbench, it's not quite an apples-to-apples comparison. The Core i5-13600K was benched in an ASUS ROG Maximus Z690 Extreme motherboard with the benefit of DDR5 memory, and and ASRock Z690 Steel Legend WiFi 6E with DDR4 RAM.
Here's how the chip performed in the ASUS motherboard...

It posted a single-core score of 2,012 and a multi-core score of 16,054. Compare those to the benchmark results obtained in the ASRock motherboard...

Here it scored 1,980 in the single-core test and 14,425 in the multi-core test. Geekbench recognizes the clocks as being virtually the same across both benchmark runs (3.5GHz to 5.1GHz in the ASUS board and 3.49GHz to 5.087GHz in the ASRock board), though it's possible the chip was actually overclocked in the ASUS motherboard, even if just slightly. 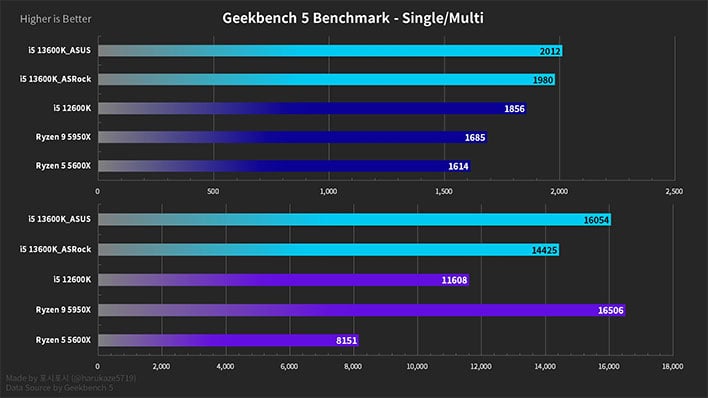 Not too shabby, though as always we have to caution against reading too much into performance leaks.