It seems like everybody on the planet is clamoring to build a new gaming PC, and that has left many components in very short supply. That cavalcade of hardware that nobody can get their hands on started in mid-September with the GeForce RTX 30 series, based on NVIDIA's Ampere GPU technology. One just has to look at our review of the RTX 3080 to understand why; NVIDIA turned the stagnant performance to cost ratio on its head for the first time since Pascal way back in 2016. As a result, the cards are just exceedingly hard to come by right now.

The supply is so outstripped by gamers' thirst for high frame rates that ASUS' ROG UK Twitter account posted an apology. It says the company understands that "the demands for these new 30 series graphics cards are causing frustrations for a lot of you". That might be a bit of an understatement, as the launch was a disaster with retailers selling out immediately and those buyers flooding eBay with the cards at inflated prices. Two months later, there seems to be no end in sight. 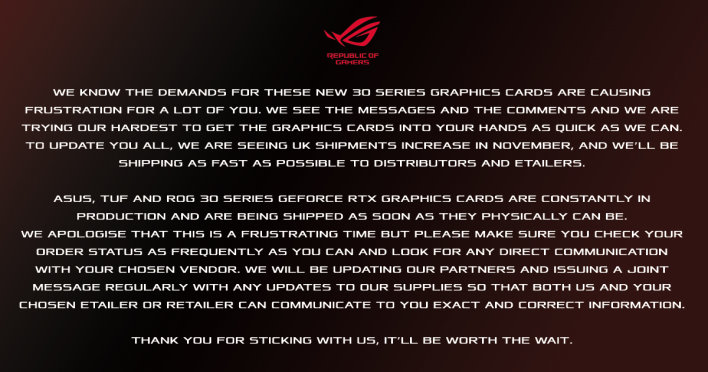 However, there's a bit of good news to be found in ASUS' statement. The company says it is seeing a rise in shipments to the UK, at least. Since this is a UK-based Twitter account, it doesn't speak about availability in other countries. Still, if NVIDIA is starting to get more GPUs into manufacturers' hands, then more cards will start to hit the market and perhaps bring a little relief to those who are still searching. However, we don't expect this to be an immediate remedy, as even NVIDIA CEO Jensen Huang says the chip maker expects continued shortages through the end of 2020.

ASUS says that TUF and ROG GeForce RTX 30 cards are in constant production and get shipped as fast as they possibly can be. Those who want to play on the Green Team just have to be patient. However, maybe the most surefire way to (eventually) get a GeForce RTX card is to jump into rival EVGA's reservation queue. Good things might come to those who wait in line. However, if ASUS' statement pans out, gamers might be able to get any brand of card they want if they just hold out a bit longer. 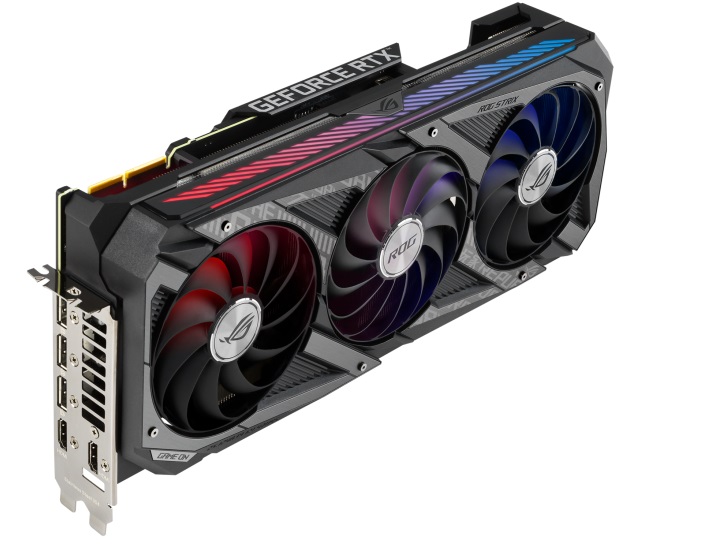 Of course, NVIDIA isn't the only graphics chip maker around. When AMD announced its Radeon RX 6000 series at the end of October, CEO Lisa Su said that Big Navi would start hitting the streets on November 18. The Red Team's biggest GPUs have their own implementation of DirectX Raytracing. AMD also says the Radeon RX 6800 XT and RX 6800 will have plenty of traditional raster performance, too. That's just this coming Wednesday, so there's not much longer to wait. Hopefully, whatever camp gamers find themselves in, they'll be able to get their hands on the card of their dreams soon.