An international team has identified a very large atomic gas structure which spans nearly 2 million light-years in a region around a famous quintet of galaxies. The team used the Five-hundred-meter Aperture Spherical Telescope (FAST) 19-beam receiver to unveil the atomic gas around Stephan's Quintet.

Stephan's Quintet is perhaps most famous for its appearance in the classic film, It's a Wonderful Life. Most recently, the quintet of galaxies was featured as the James Webb Space Telescope (JWST) turned its sights toward the group of galaxies. At the time, the image was Webb's largest image captured by the space telescope to date. Now, an international team has performed a deep mapping of 21-cm line emission in a region around Stephan's Quintet, which revealed a large mass of atomic gas.

Atomic gas is the essential material which all galaxies are formed from. Galaxies evolve through a process of accreting atomic gas from the intergalactic medium and then converting in into stars. This is the reason that it is vital for scientists and astronomers to seek out atomic gas in and around galaxies in order to study how galaxies form and evolve over time. According to a new study published in Nature, "The most direct method of exploring atomic gas is through observation of the 21-cm fine structure line emission of atomic hydrogen in the radio waveband." 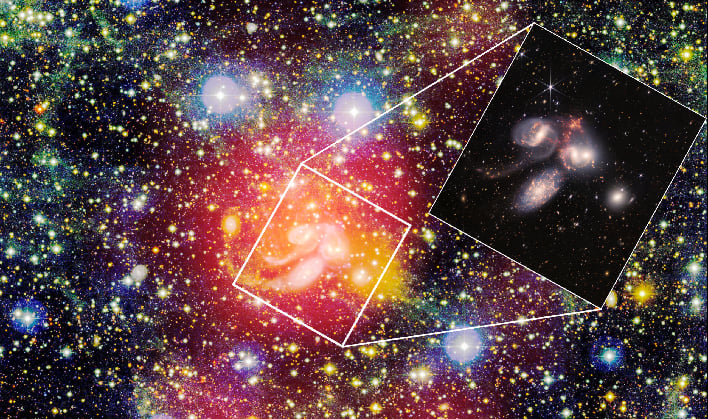 Cong, who led the study and is a researcher from the National Astronomical Observatories of the Chinese Academy of Sciences (NAOC), stated, "This is the largest atomic gas structure ever found around a galaxy group."

The paper explains "atomic hydrogen is the least bound component of galaxies and is therefore the easiest to be stripped off and spread around during interactions." Because of this, the dispersed atomic hydrogen's distribution and its velocity field can provide researchers with new data concerning the earliest of interactions.

By observing the new data, researchers say that large-scale, spread out, low density gas dwells far away from the center of the quintet of galaxies, making it likely that the gas has been there for ~1 giga years. This puts into question the current theory of galaxy-group formation/evolution "because it is not clear how the low-density atomic gas can survive ionization by the intergalactic UV background on such a long time scale."

If you would like to read more about the study by the international team, you can find more information on the Nature website.