New evidence points to the Andromeda galaxy being a cannibal that has been growing with intermittent feasts of smaller galaxies. An international team of scientists recently published a paper with the findings of two honor students.

A team of scientists led by a University of Sydney astrophysicist has discovered a structure of stars, known as globular clusters, which originated outside the galaxy. The new structure has been named the Dulais Structure, Welsh for a black stream, by Professor Geraint Lewis. The new findings point to the Dulais Structure being representative of a "colossal feeding event in the 'recent' past."

"A few years ago, we discovered that in the far outskirts of Andromeda, there was a sign in the objects orbiting it that the galaxy hadn't been grazing, but it had eaten large quantities in two distinct epochs," remarked lead author Professor Geraint Lewis from the University of Sydney. "What this new result does is provide a clearer picture of how our local universe has come together—it is telling us that at least in one of the large galaxies, that there has been this sporadic feeding of small galaxies." 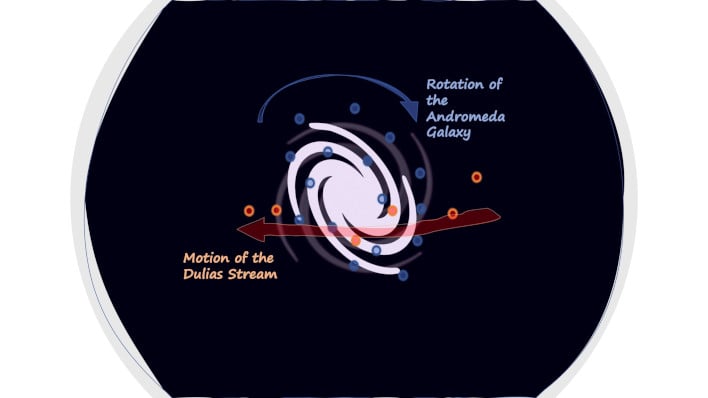 
The recent finding provides evidence that galaxies grow by munching on smaller galaxies, which opposes the more dignified picture of galactic growth. Andromeda has the trademarks of two major feeding events. The most recent feeding happened roughly sometime in the last 5 billion years, while the older feast occurred around 8-10 billion years ago. This means that the events more than likely took place while matter in the universe was closer together and more densely concentrated.

"That then leads to the next question of, well, what was actually consumed? Because it doesn't look like it was just one thing, it looks like it's been a collection of things which are all being slowly torn apart," explained Professor Lewis. "We've come to realize over the last few decades that galaxies grow by eating smaller systems—so little galaxies fall in, they get eaten—it's galactic cannibalism." 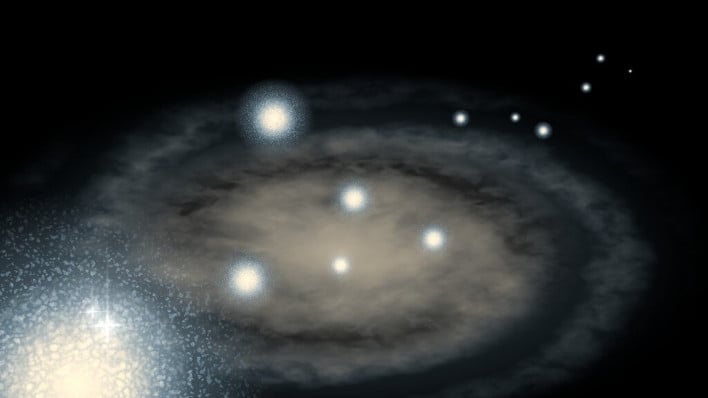 
The team is now trying to find out if the Milky Way has grown in the same manner, or if it is different. Professor Lewis indicated that the team wants to come up with a more accurate clock in order to identify when the events happened, because that is vital to include in future models of how galaxies evolve.

"It's opened a new door in terms of our understanding. But exactly what it's telling us I think we still have to work that one out," stated Professor Lewis.