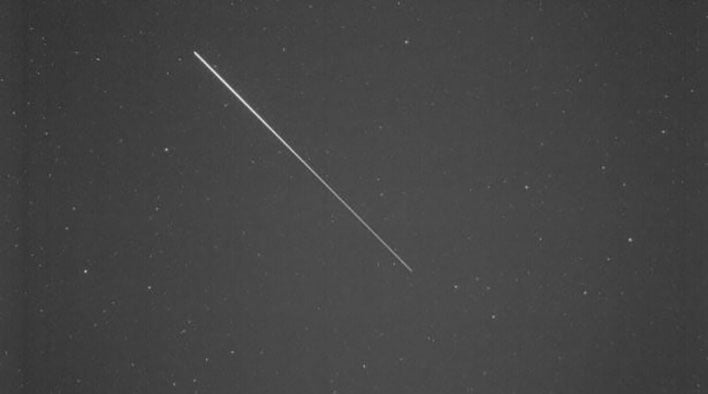 Starlink-1352 flare observed in June 2020. Image by the Pomenis Observatory via SATCON1 report.

If these new satellite companies are successful, satellites could be visible at all times of the night. Patrick Seitzer, a professor of astronomy at the University of Michigan, recently remarked that, “If a large constellation like OneWeb-- 47,000 satellites at 1,200 kilometers-- is launched, every 32nd exposure will have at least one satellite trail.” He further noted that no matter the time of night, “we’ll have at least one satellite trail.” These streaks make it difficult for astronomers to get clear images of the night sky and various phenomena. These satellites could potentially affect everything from measuring the physics of dark energy and dark matter to the discovery of objects like Comet NEOWISE.
The report included a list of recommendations for both satellite companies and astronomers. Astronomers must primarily figure out a way to deal with the large number of satellites that are being deployed. They noted that they will need to improve their software so that they can digitally eliminate these irritating streaks and better predict satellite patterns.
The astronomers primarily ask that satellite companies work on darkening their satellites. SpaceX is already experimenting with various coatings and visors to make their satellites less reflective. Astronomers are also worried about the orbital height of satellites. Satellites that orbit higher than 600 kilometers tend to be visible for extended periods of time. Companies will therefore need to adjust their orbital heights if they wish to shorten the visibility period of their satellites.
SpaceX’s first major Starlink deployment occurred in May 2019 after a prototype test flight in 2018. Both SpaceX and astronomers have therefore had a little over a year to reflect on the positive and negative consequences of satellite constellations. Starlink beta testers were recently experiencing download speeds of up to 60 Mbps. These are relatively impressive speeds considering SpaceX has only deployed a little over 600 satellites. SpaceX has been approved to launch 12,000 satellites and has filed approval for 30,000 more. Faster Internet speeds will hopefully not come at the cost of more cumbersome astronomical research.