On January 18th, a 1km-wide (.62mi) asteroid will zip by Earth. Although it will be a relatively close encounter, there is nothing to fear as the giant hunk of rock will pass 1.9 million miles from our pale blue planet, which is roughly seven times the distance to the moon. However, what is interesting about this asteroid is that you may be able to view it if you have a keen eye and a decent telescope, or you can track it online to keep your planet-killing fears at bay.

Near-Earth #asteroid 1994 PC1 (~1 km wide) is very well known and has been studied for decades by our #PlanetaryDefense experts. Rest assured, 1994 PC1 will safely fly past our planet 1.2 million miles away next Tues., Jan. 18.

This month, NASA tweeted about near-Earth asteroid 7482 (1994 PC1), which is set to make its closest approach to Earth on January 18th. This rather beefy asteroid will zip by at the ripping speed of 19.56 km/s or 43,754.47 miles per hour. While this may sound concerning, as we mentioned, this asteroid will have quite the gap between itself and Earth at 1.9 million miles. However, if that number is not enough to quell your concerns, you can keep an eye on 7482 by using some of NASA’s online tools. 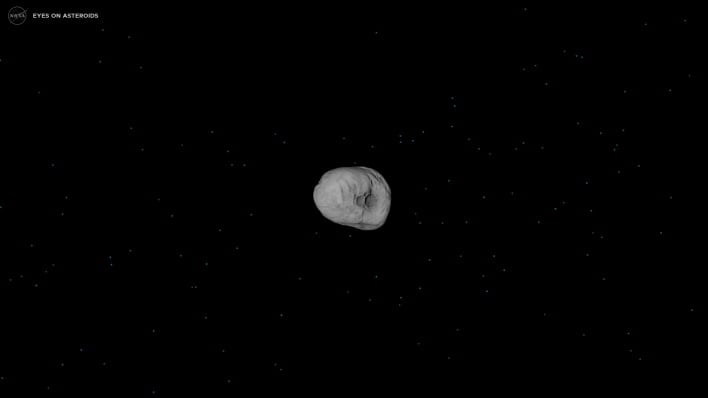 The first and likely most interesting tool is NASA’s “Eyes on Asteroids” webpage which gives users a view of how chaotic near-Earth space is when first loading up the page. Within this tool, though, users can search for specific objects in space or filter for “Potentially Hazardous Objects,” which are bigger than 150 meters and come within 7.5 million kilometers or 4.6 million miles of Earth. 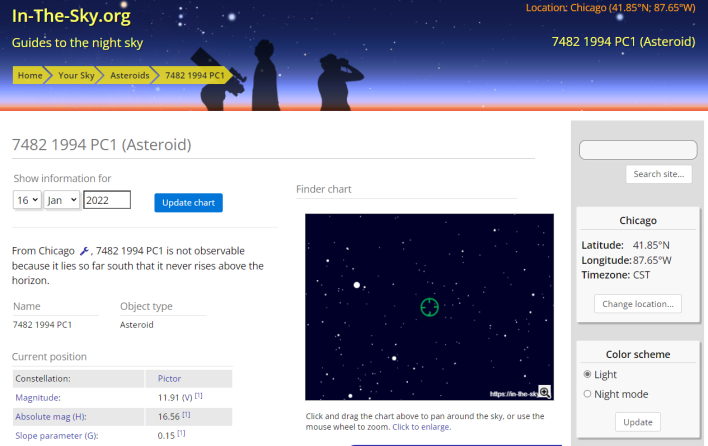 For the astronomers among us, another cool tool comes from In-The-Sky.org, which can give vital information on how to spot near-Earth asteroid 7482 (1994 PC1) from any location, provided you have a telescope able to view the asteroid on its current trajectory. To gather this info, users simply need to plug in the dates when they want to view the asteroid, and the site will do the rest.

In any event, the technology that we have access to today is quite remarkable in that we can track space objects from our computer or phone rather easily. Perhaps we will have technology like telescopes and communications arrays hitching a ride on asteroids like this one day too, but for now, let us know what you think of this upcoming asteroid visit in the comments below.