Back in July, we got a 30-minute glimpse of the new Assassin’s Creed title, and though it was a work in progress build, it was interesting to say the least. People did get excited about the game as they were expecting more information around this time. Following the leak, Ubisoft was able to show off the game at the Ubisoft Forward event officially. From that event, an official trailer appeared, and the excitement for the game continued.

According to the Ubisoft site for Assassin’s Creed Valhalla, this title is a “dark ages open-world game” with raids, “visceral combat,” settlements, and more. Players can “Become Eivor, a mighty Viking raider and lead your clan from the harsh shores of Norway to a new home amid the lush farmlands of ninth-century England.” You can enjoy this expansive world on Xbox, PlayStation, and PC.  Playing this game sounds like it will need a bit of horsepower to drive on PC, though, so Ubisoft has also provided a list of PC specs for different resolutions and framerates. 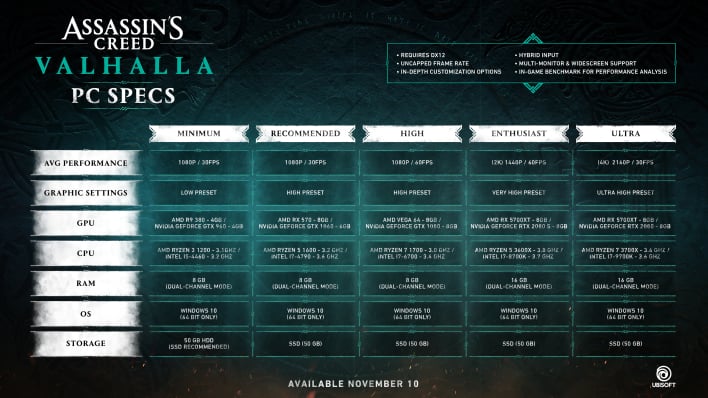