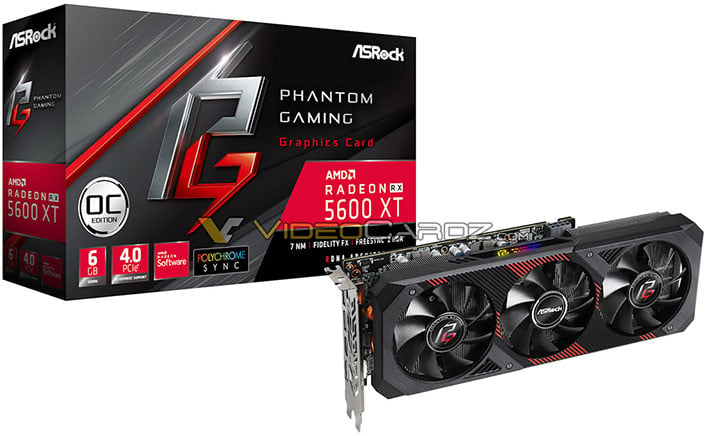 If you have a secret to share, better do your best to keep it away from ASRock, because the company is apparently not very good at keeping them. Last week, ASRock essentially confirmed the specs of AMD's upcoming Radeon RX 5600 XT by posting a product page (which was later removed), and now a related press render has found its way to the web.
Not that we are complaining, though it is unclear how AMD feels about the situation. Marketing is a funny thing, and in some cases, it is nearly impossible to discern a true leak from a controlled one, the latter of which is intended to drum up buzz and excitement for an upcoming product. It is anyone's guess which category this one falls into.
Either way, the folks at Videocardz got their mitts on what looks to be an official press render for an ASRock Phantom Gaming Radeon RX 5600 XT OC Edition graphics card. It's an overclocked model, and perhaps the same one that was briefly posted online last week. That means we still do not have a bead on stock clocks.
Assuming these leaks are accurate, however, then the Radeon RX 5600 XT will debut with 2,304 stream processors and 6GB of GDDR6 memory (12Gbps) on a 192-bit bus, yielding 288GB/s of memory bandwidth.
The number of stream processors is the same as found on the Radeon RX 5700 (non-XT model), though that card has a higher memory bus (256-bit) and uses faster GDDR6 memory chips (14Gbps). It also sports faster clockspeeds across the board.
As for ASRock's overclocked model shown above, if it is the same one as from the previous listing, it will feature a 1,185MHz base clock, 1,420MHz game clock, and 1,600MHz boost clock. And from the press render, we can also make out a single 8-pin PCIe connector, three DisplayPort outputs, and an HDMI output.
ASRock will undoubtedly release several variants. This particular one sports a three-fan cooling solution and looks like it occupies two expansion slots. As to the performance, a recent 3DMark leak suggests the Radeon RX 5600 XT will perform roughly on par with a Radeon RX Vega 56.
The Radeon RX 5600 XT is expected to be announced at the Consumer Electronics Show (CES) in Las Vegas next week.