Konami had a hit on its hands when it released a licensed arcade game based on The Simpsons way back in 1991, when arcade dens were still thriving. Now three decades later, Arcade1Up announced at E3 2021 that Bart Simpson and his family are making a glorious return to the arcade scene with an upcoming colorful cabinet.
It's pretty remarkable to think that The Simpsons is still relevant. Created by Matt Groening, The Simpsons first aired as a series of shorts in 1987 before being upgraded to a full-fledged standalone cartoon series in 1989. It has gone on to span 32 seasons consisting of more than 700 episodes, and is still being produced. 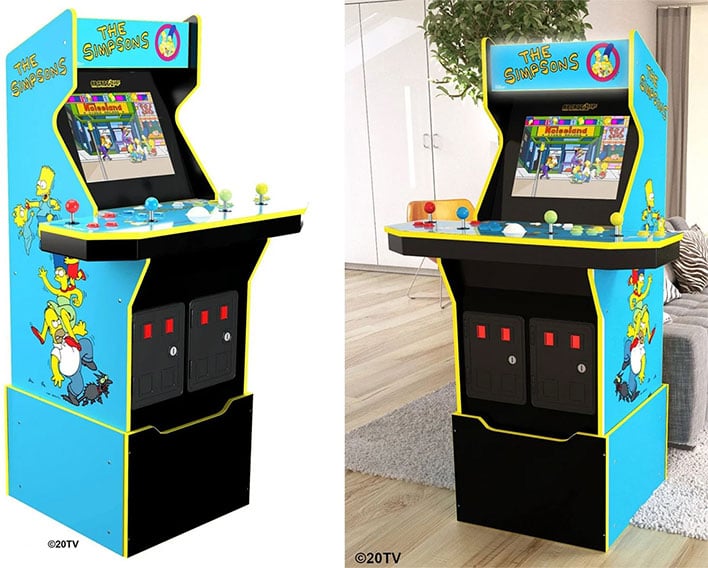 As for the arcade from back in the show's early days, I remember dropping more than a few quarters on the side-scrolling beat 'em up. The upcoming re-release brings back the four-player gameplay and joins other iconic revivals from Arcade1Up, like Teenage Mutant Ninja Turtles, another four-player game with support for online multiplayer. Make no mistake, retro gaming is alive and well.

You can expect The Simpsons arcade to be smaller than the one you might have played on back in the day (it measures 22.75 x 31 x 57.8 inches and sports a 17-inch display), though like Arcade1Up's other cabinets, there will be a riser available to add some height.
In addition to four-player support, features include Wi-Fi connectivity, an exclusive stool, a lit marquee, a clear deck protector, and a tin sign measuring 18 inches by 24 inches. You might also notice from the pictures that there is a trackball in the middle of the cabinet's deck. That because the arcade will also come with Simpsons Bowling!, a less successful licensed game, but a nice inclusion all the same.
Oddly enough, Arcade1Up has taken down its product page for its upcoming Simpsons arcade cabinet, perhaps because it will flesh out its announcement after E3, with more details. To that end, there's no mention of the price on the company's website, but reports suggest it will go for $599.99. Preorders are expected to open on July 15. That would make it a little over $100 more expensive than NBA Jam, which sells for $494.99 on Amazon.