Now that Intel has formally entered the discrete GPU space with its first Arc Alchemist GPUs (A350M and A370M), all eyes are focused on how the introductory mobile parts perform and what they might reveal about future products. While we wait for official benchmarks to land, some leaked 3DMark scores have tipped up.
Let's get the usual caveats out of the way. Leaked benchmark runs shouldn't be taken as concrete evidence of how a part will perform in the real world. Sometimes they're accurate, sometimes they're not. Nevertheless, until products land in the hands of consumers and reviewers, leaks and Intel's own claims are what we have to go on.
Moving on, what tipped up, according to prominent Twitter leaker @harukaze5719, are a handful of 3DMark listings purportedly obtained from a Samsung Galaxy Book 2 Pro outfitted with an Intel Core i7-1260P processor and Arc A350M GPU.
To recap the makeup of the A350M, it's based on the smaller of the two SoCs Intel introduced, the ACM-G11. It wields 6 Xe cores, 6 ray tracing units, 4GB of GDDR6 memory linked to a 64-bit memory bus, and a 1,150MHz GPU clock. Here's how it allegedly performed... 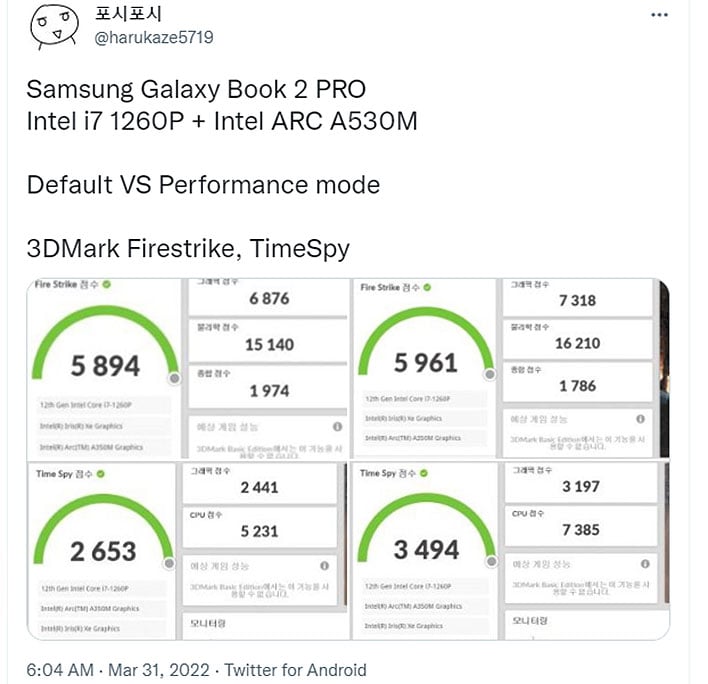 The leaker was able to dig up Fire Strike (DirectX 11, 1080p) and Time Spy (DirectX 12, 1440p) benchmarks, with scores for both Default and Performance power settings. If we narrow our focus to the Graphics score (to isolate the GPU), the A350M in Default mode scored 6,876 in Fire Strike and 2,441 in Time Spy. And in Performance mode, it scored 7,318 in Fire Strike and 3,197 in Time Spy.
If we look at Notebookcheck's vast collection of GPU scores, we see the leaked Arc A350M benchmark run in Performance mode is in the general neighborhood of a GeForce GTX 1650 mobile...
Time Spy
Fire Strike
The leaked runs are obviously not setting any benchmark records, but (A) this is a leak, (B) driver updates could make a difference, and (C) these were obtained from a single laptop model. Any and all of those points are potential factors.
It's also worth noting that even Intel's entry-level Arc A350M GPU features dedicated hardware for ray tracing. Throw in XeSS upscaling and things could get interesting.