Sorry, This Apple Windows 10 Concept Isn't An OS We Want But A Few Features Are 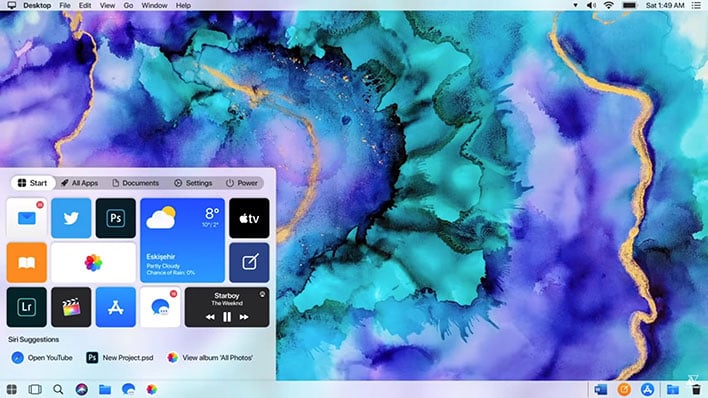 Have you ever wondered what Windows 10 would look like if Apple had designed it? One concept artist has reimagined Windows 10 as an Apple product. The concept includes a few interesting features, but overall we find ourselves personally favoring the existing Windows 10.

Kamer Kaan Avdan published a video that asked “How would it look like, if Apple created Windows 10?” His version of Windows 10 features Apple’s iconic playful and colorful aesthetic. Several Windows 10 features also have naturally been replaced with Apple items. For example, users would browse with Safari instead of Edge and Cortana has been replaced with Siri. There are also a handful of characteristics that are more unique to Apple. Avdan has added dynamic wallpapers, the ability to unlock your computer with your iPhone, and access to iMessage. We are particularly intrigued by the dynamic wallpapers which currently require third-party software on Windows 10.

As we watched the demo, we asked ourselves whether Avdan’s creation was truly better than Windows 10. Tech writer Wayne Williams preferred Avdan’s creative concept. He stated, “Windows 10 under Microsoft’s control isn’t a bad looking operating system, but even after all these years it still doesn’t feel quite finished, with elements of the old design cropping up in various places.”


We personally find that we disagree with Williams’ overall favorable assessment. Avdan included a Mac-style menu bar at the top of the screen. This menu bar feels redundant and would make it more cumbersome to access the menus in other programs. Avdan’s start menu includes Mac-style Windows 10 tiles, but hides applications behind a tab. We prefer being able to see all of our apps and being able to click on them more quickly.

At the end of the day, it is all a matter of preference, but Apple and Microsoft clearly have strong fan bases. As of September 2019, Microsoft announced that there are over 900 million active Windows 10 devices around the world. Apple has been a bit cagier with their numbers, but we do know that there were at least 100 million active users in 2017. Overall, Avdan’s concept art is a neat look into what Windows 10 could be if Apple had designed it. We simply find that we prefer our Windows 10 shaken not stirred.