Everything about the new Apple Watch Ultra screams 'big and bold'—it has a big display (49mm), a big battery rated for up to 36 hours during normal use and 60 hours when enabling a low power mode, a big starting price ($799), and if you manage to break it, you're looking at a big repair fee if you didn't opt for a $99 AppleCare+ protection plan.
Given the premium pricing attached to the Apple Watch Ultra (the Apple Watch Series 8 starts at $399), potential buyers may find a $99 add-on plan hard to swallow. But without AppleCare+, you're looking at an estimated $499 repair fee if you manage to crack the display, damage the titanium case, or if something otherwise breaks or goes bad—like an internal sensor. 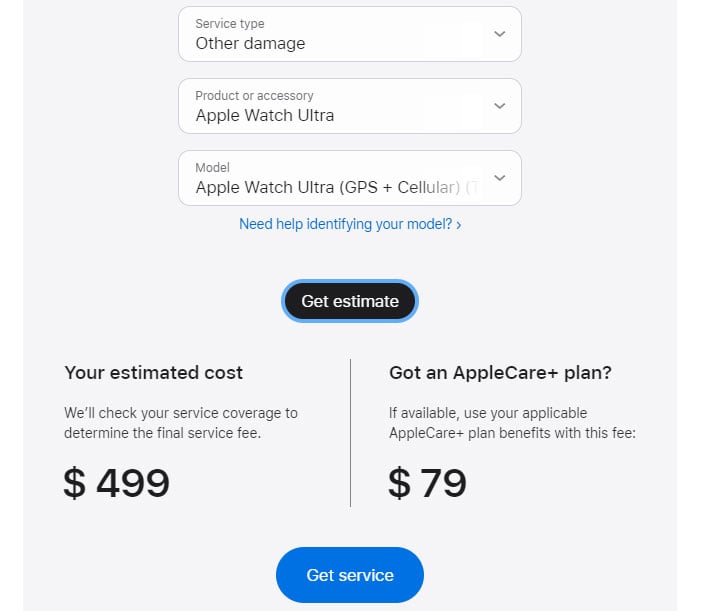 That's more than 62 percent of the Apple Watch Ultra's selling price. Incidentally, Apple isn't trolling Ultra owners—it saves that for users who want RCS support on iOS. That's the same fee for the titanium version of the Apple Watch Series 7.

I've owned an Apple Watch since the first model came out (have upgraded twice) and never managed to break one, but they're not indestructible. It's also worth noting that Apple says it created the larger Ultra model for "explorers," "endurance athletes," and "those who aspire to push beyond their limits."
"With the bigger, brighter display and rugged design, Apple Watch Ultra is the perfect technical tool for adventurers and explorers in a range of environments, from the everyday to the extreme," Apple says.
Marketing imagery depicts Apple Series Ultra owners climbing rocks and running through sand dunes. Such locales present hazards that typically don't exist in a trip to the grocery store or a jog around a suburban neighborhood. That said, the Apple Watch Ultra brings added ruggedness to the table—it's certified to the "relevant aspects of MIL-STD-810H" and boasts an on-wrist operating temperature designed to withstand extreme environments (-4F to 131F, or -20C to 55C).
Still, if you're considering Apple's biggest smartwatch to date, you'll want to think long and hard about an AppleCare+ plan. That exorbitant $499 repair fee drops down to $79 with AppleCare+. Unfortunately, you don't get a break on battery replacements—that'll run you $99 whether you have AppleCare+ or not.