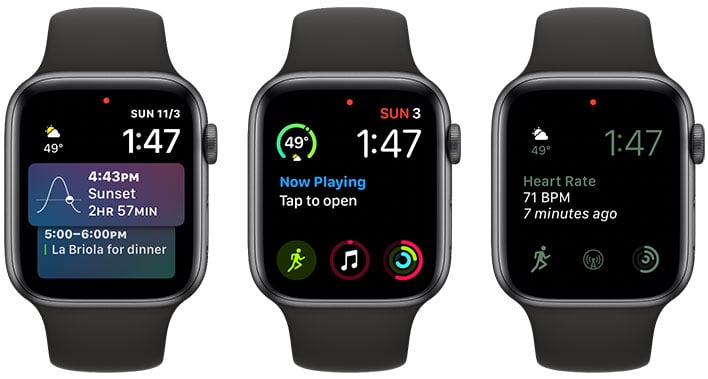 Health has always been a focus of the Apple Watch and other wearables, and at minimum you can typically expect there to be a built-in heart rate monitor on today's smartwatches and fitness bands. FitBit went the extra mile, though, and rolled out a software update that added blood oxygen tracking on some of its devices. Now it looks like Apple is working on the same thing.
In case you are wondering, a normal blood oxygen level is between 75 and 100 millimeters of mercury (mm Hg). There are various symptoms of a low blood oxygen level, such as shortness of breath, dizziness, headaches, chest pain, rapid heartbeats, high blood pressure, and so forth. According to the Mayo Clinic, values under 60mm Hg typically indicate a need for supplemental oxygen.
As it applies to the Apple Watch, the folks at 9To5Mac took an "exclusive look at iOS 14 code snippets" and found hints that Apple is developing a new health notification based on blood oxygen levels. If an Apple Watch detects that the blood oxygen level of the user is at a certain threshold, it would send a notification, similar to the notifications it sends for heart rate monitoring.
It's not yet known what exact hardware and software would be required for this function. Just speculating, this could be something that Apple rolls out as part of its Apple Watch Series 6 refresh. It might also arrive on newer Apple Watch handsets with the introduction of watchOS 7, which is expected to release sometime in the fall.
Older models would presumably be left on the sidelines, not necessarily. For example, I own the original (first generation) Apple Watch—it's not even a Series 1, as Series 1 and 2 are technically considered second generation models (Series 3 is third generation, Series 4 is fourth generation, and Series 5 is fifth generation). It does have a built-in heart rate monitor and should be able to support a blood oxygen detection feature, but I have a hunch Apple would limit support to newer models.
It's also worth noting that Apple upgraded the heart rate monitor with the Series 4, as it added electrocardiogram (ECG) features. That could potentially make Series 4 and later models better suited for blood oxygen measurements, but we'll have to wait and see.