Curved glass and folding form factors are gaining a bit of traction as panel makers figure out ways to break from the mold of traditional, straight panel designs. This creates opportunities for hardware makers to explore new form factors. We've seen this from Samsung with the Galaxy Fold, and if a new patent application comes to fruition, Apple will try something brand new with its iMac all-in-one systems.
Apple filed the patent application in question (20200026327) on May 1, 2019, and it was published last Thursday. It describes a "glass housing" with a display area up top, an input area on the bottom (basically a keyboard), and a "curved surface between the upper portion and lower portion" of the entire, one-piece assembly. 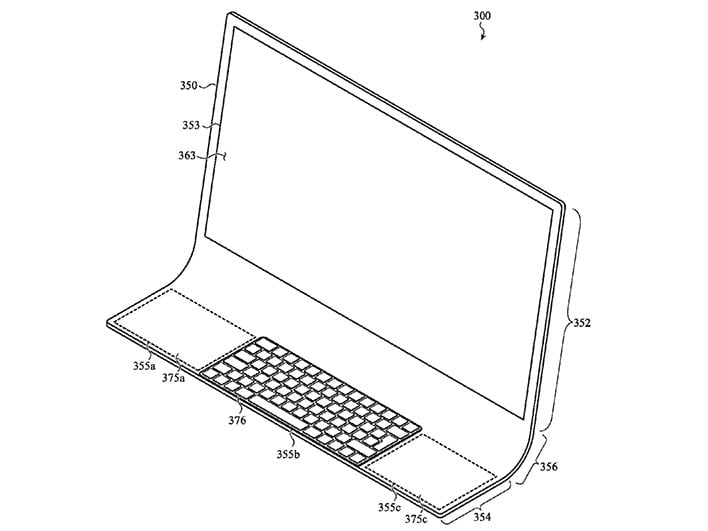 "A desktop computer may include a display, an input device operably coupled to the display, and a glass sheet. The glass sheet may include a first portion defining a planar display area, a second portion defining a planar input area, and a curved portion between the planar display area and the planar input area. The desktop computer may include a support structure coupled to the glass sheet and configured to support the glass sheet," the patent reads.
As envisioned, this would essentially be a single sheet of curved glass. The top portion would feature an embedded display panel, while the lower portion would contain the keyboard and trackpad(s), as shown in the drawing above.
This would be a dramatic departure from the current iMac design that's been around for several years, which features an aluminum housing for the display and internal electronics, with the keyboard and mouse offered as separate, non-integrated peripherals. 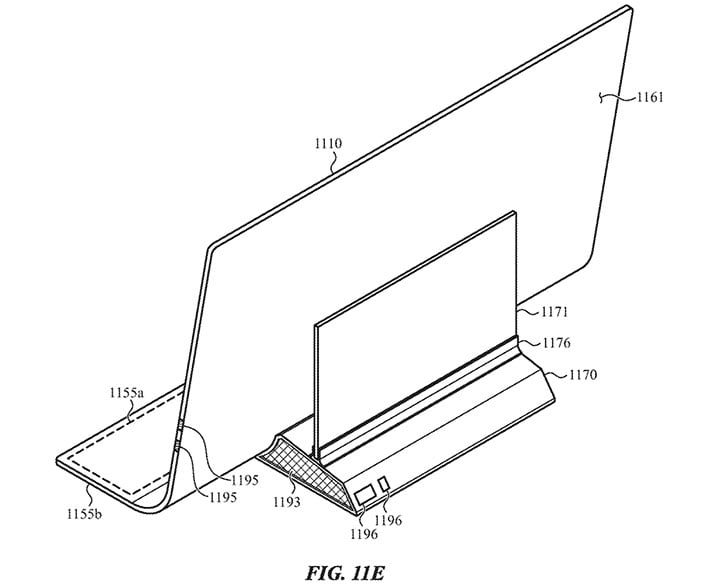 The first image looks like the iMac would simply tip over on its back, though a separate drawing of the rear shows a "support structure coupled to the glass housing member" that is "configured to support the computing device." It's not clear if the back assembly would contain the core components, or act as a dock of sorts.
In yet another drawing, Apple depicts a MacBook sliding through the glass assembly—there is a cutout in the curved portion for the keyboard on the MacBook to slide through, with the display on the laptop being wedged up against the glass. It's a weird design, but perhaps Apple is covering all of its bases.
Who really knows if this will morph from a patent into an actual product. If nothing else, it's interesting to see why kinds of concepts Apple toys around with behind closed doors.