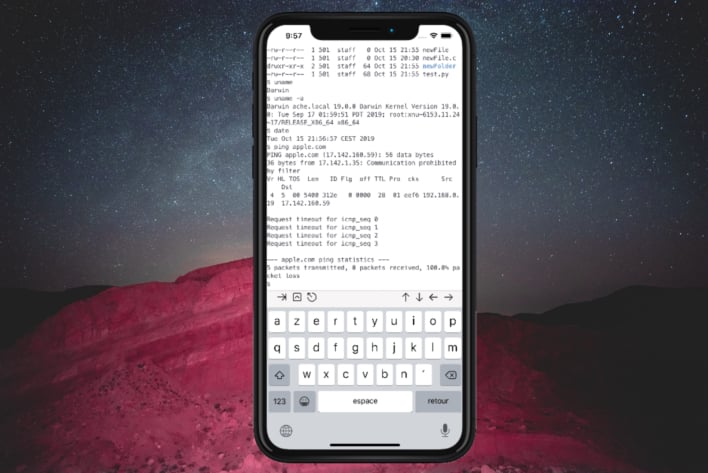 Apple has been on somewhat of a rampage with their App Store late this year, between the Fortnite debacle and new obtuse rules. In a seemingly reversed stance, Apple went up against Linux and Unix shell-app developers, claiming that they violated App Store Review Guidelines.

Linux and Unix shells are essentially command-line interfaces, and in this case, are installed on devices that typically do not have command line functionality. Apps such as iSH and Blink Shell offer these tools to provide more features to the power users or IT wizards. They can eliminate the need for different devices on the go, especially if you can pair up a keyboard and get work done. The command-line functionality, while useful, could also pose problems for the uninitiated and seemingly went against Apple’s App Store regulations. On Sunday, the Twitter account for iSH announced that the app would be removed from the App Store within 24hrs. Another shell app, a-Shell, replied, stating that Apple sent it a termination notice too. According to their Apple contact, a-Shell would have had to remove curl, pip, and wasm.

FYI, Apple sent a-Shell a similar notice of termination a few days ago. Our appeal is still pending.
The commands we would have to remove to stay in the AppStore are curl, pip and wasm. https://t.co/nRqK3qu66B

Those three commands could be used for grabbing code from the web and installing it on a device. iSH announced that these commands, which are likely within their own app as well, do not comply with section 2.5.2 of App Store Review Guidelines. This rule states that “apps should be self-contained in their bundles, and may not read or write data outside the designated container area, nor may they download, install, or execute code which introduces or changes features or functionality of the app, including other apps.”

However, the way this rule was applied was incorrect, as iSH developer Saagar Jha explains in his blog. He writes that “Rejecting a drawing application for what the user can draw in it is absurd, but this is exactly how section 2.5.2 is used to reject legitimate scripting applications.” In essence, users could get files through app-provided commands, but the users have to run the commands for them to work. The logic is along the lines of guns do not shoot people; people shoot people.

We got a call this evening from someone who runs App Review. They apologized for the experience we had, then told us they've accepted our appeal and won't be removing iSH from the store tomorrow. We'll stay in contact with them to work out details.

After this situation occurred, an App Review representative reached out to the iSH dev team and told them their app would not be removed from the App Store. Furthermore, they hope to open a communication line with Apple and other developers with similar apps, so issues like this do not happen again. Hopefully, events like this and user feedback will make the App Store a better place for all developers. It just takes a little threat from Apple to get it done.
(Image courtesy of a-Shell)