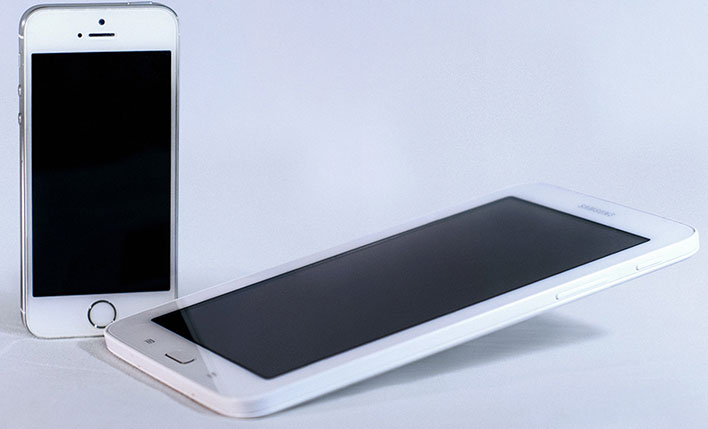 In what is like to come as a surprise to absolutely no one, the latest market research data shows Apple and Samsung shipping around the same number of smartphones, putting the two technology behemoths on relatively equal footing (in terms of market share). It's a little hard to gauge, though, because Apple no longer provides specific sales data for its iPhone lineup.
How exactly the numbers are split depends entirely on which market research firm you believe is the most accurate. Same goes for which company comes out ahead of the other—both Strategy Analytics and Canalys counted more iPhone shipments than Galaxy handsets, while IHS Markit gives the edge to Samung by a few million units.
Here's a breakdown of the numbers for the fourth quarter...
Canaly had the biggest gap between the two companies, with 7 million units separating Apple from Samsung, while both other firms found the difference to be much narrower. Incidentally, all three pegged Huawei as having shipped 56 million phones in the fourth quarter. That puts the firm in third place, and is quite remarkable, considering the US government's push to keep Huawei products out of the country.
Make no mistake, this is a high stakes game. Apple is coming off its most lucrative quarter in the company's history, having raked in $91.8 billion for the three-month period ended December 28, 2019.
"We are thrilled to report Apple’s highest quarterly revenue ever, fueled by strong demand for our iPhone 11 and iPhone 11 Pro models, and all-time records for Services and Wearables," Apple CEO Tim Cook said in a statement. "During the holiday quarter our active installed base of devices grew in each of our geographic segments and has now reached over 1.5 billion. We see this as a powerful testament to the satisfaction, engagement and loyalty of our customers—and a great driver of our growth across the board."
Apple is worth more than $1.4 trillion (yes, TRILLION), based on its current share price ($322.64). Meanwhile, Samsung saw its quarterly operating profit dive 34 percent to 71.6 trillion won (~$6 billion in US currency). Much of that is due to memory chip pricing, however, as Samsung's mobile business actually performed quite well and helped offset a comparatively bad quarter, and year.

It will be interesting to revisit things in a year. That's because 5G connectivity is starting to gain some steam, and rumor has it Apple's next round of iPhone models will sport 5G hardware, just as some of Samsung's current generation Galaxy devices already do.