Any time you update the operating system on your PC or Mac, it is usually followed by a few days of holding your breath as you wait to see if there are any major bugs that will crash your or otherwise disrupt your system. As such, owners of some older Mac computers are finding themselves gasping for breath following a recent update to macOS Monterey.

Apple has been wowing its fans with its latest product lineup it announced last week. The M1 Pro has seen good reviews since its announcement, along with M! Max in MacBook Pro laptops. But the latest macOS update may be putting a damper on all of that for some.

There is an eerie echo from the past resonating for some Mac owners right now. The reason for the gasps for breath is because for some the latest macOS Monterey has bricked their entire Mac (and we all know they ain't cheap). There have been numerous reports of Mac owners stating as they were updating to the new macOS release, the screen went completely black and then failed to turn back on.

Confused, fearful, and downright angry owners have taken to Apple Support Communities on Twitter and Reddit to let the company and other Mac owners know of their current situation. Some of the disgruntled users have said that they talked with Apple Support and were told there would be an update coming that should resolve the issue. The response on social media from those users is, "How do I install an update on a dead Mac?" A good question indeed. 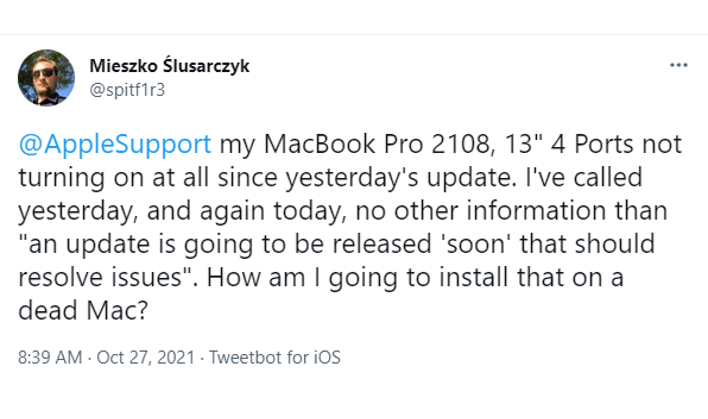 There is a small glimmer of hope that has been shared as a possible solution. The idea that was shared on Apple Support communities is to try a revive or restore on the Mac's firmware. This is typically done in the rare instance when a power failure occurs during a macOS update or upgrade, and the Mac becomes unresponsive, according to an Apple support document. But if you are staring at what you fear is now a very expensive paperweight, it is well worth trying.

The issue seems to be delegated to older Mac products. The more recent Apple silicon-based Macs seem to be fine, for now. But that could change as reports of bricked Macs continue to filter in. It is worth noting that as of right now the problem seems to be affecting less customers than last year's Big Sur incident according to one report.

So, if you are a current Mac owner and have not yet updated to macOS Monterey, it may be worth waiting for another update before pulling the trigger. As with any new software version it is usually a good idea to wait out the bugs that normally come with an initial launch. And when you are talking the kind of money an Apple Mac costs these days, it could more than worth it to wait.