Apple certainly raised eyebrows when it announced its departure from Intel for its CPU needs, instead opting to go with its own home-grown silicon solutions. Since then, Apple launched its fairly successful Apple M1 MacBook line, and new potent M1 Max and M1 Pro-powered MacBook Pro offerings with big performance gains and memory complements have hit the market. Apple is clearly onto something here, and it's good to see the smaller pool of memory, that many complained about in its initial offerings, being expanded to up to 64GB in M1 Pro and M1 Max enabled machines. That said, a big problem with Apple's new memory config and MacOS has surfaced, and it appears to be a massive memory leak.

A memory leak is a resource leak that is basically representative of mishandling app instructions that can cause a program to fail to let go of unneeded memory space. This often results in a single program arbitrarily taking up more memory resources than it should, at which point the amount allocated to it grows until either the program crashes or the system runs out of memory entirely. At that point, your whole system could either become completely unresponsive and a reboot is likely the best course of action from there. 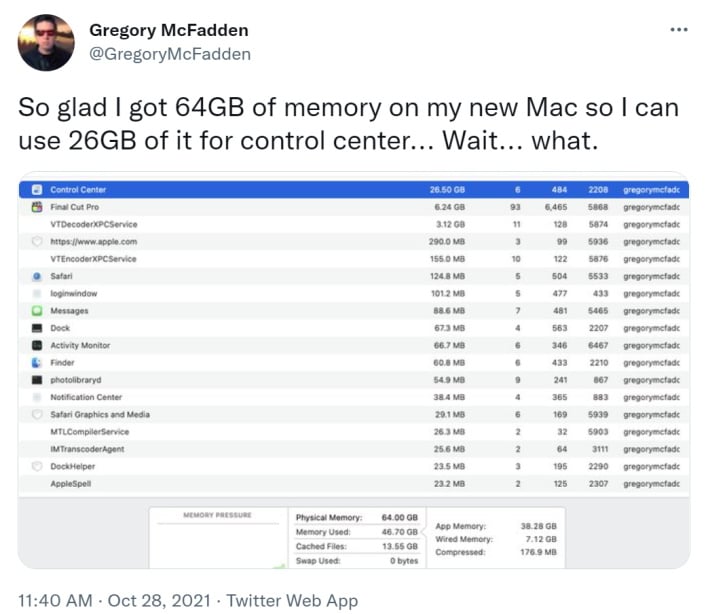 Normally this problem is related to a single program, perhaps something a video game or editing software could often encounter. But Apple's issue seems a bit more sporadic. A recent Tweet from Gregory McFadden showcases this problem quite well in a screenshot he shared. It's kind of wild, and we can't think of a single scenario why the Control Panel would ever need to take up 26GB of memory space. It's not actually using that much memory, it's just claiming it and therefore no other programs can access it. Michael Simon of Macworld chimed in with his own experiences and how this issue often leaves his original M1 MacBook in an unusable state. And, thanks to his article, more and more people are sharing their experiences with the same issues with their Apple MacBooks based on the M1 series of chips.

This memory leak issue should be something that Apple can get sorted, hopefully in short order. After all, Apple's new shared memory architecture is part of the reason why its new Apple Silicon offerings are so performant. Either way, it's obviously a big, nagging issue and we hope it's ironed out quickly for the sake of end user early adopters that are hoping big things from their new, expensive Apple MacBooks.