An Apple M1 Mac User Reports His SSD Is Getting Eaten Alive, Are You Affected?

Apple's latest M1 Macs -- and many Intel-based ones, for that matter -- all use the company's T2 security chip, which encrypts the system's built-in storage. The issue with highly-integrated motherboards with onboard storage is that if the onboard SSD wears out, the whole system becomes a brick of e-waste. And as flash density increases by storing more bits per cell (for example, Samsung's QVO drives with QLC NAND), its longevity decreases, since it can't handle as many write operations. That's why it might be a good idea to keep track of whether a system with built-in storage is wearing itself down.

Hector Martin, one of the developers responsible for porting the Linux kernel to Apple Silicon M1 processors, asked the question on Twitter: how much writing has the SSD in your Apple M1 Mac done? The early M1 systems all shipped with just 8 GB of RAM out of the box, and could only be upgraded to 16 GB at the time of purchase. So on top of installing apps, writing documents, and caching files, Macs under heavy use could also be writing a lot to a swap file. One user reported that his Mac mini with a 1 TB SSD and 16 GB of memory was writing to the drive at a frightening pace. 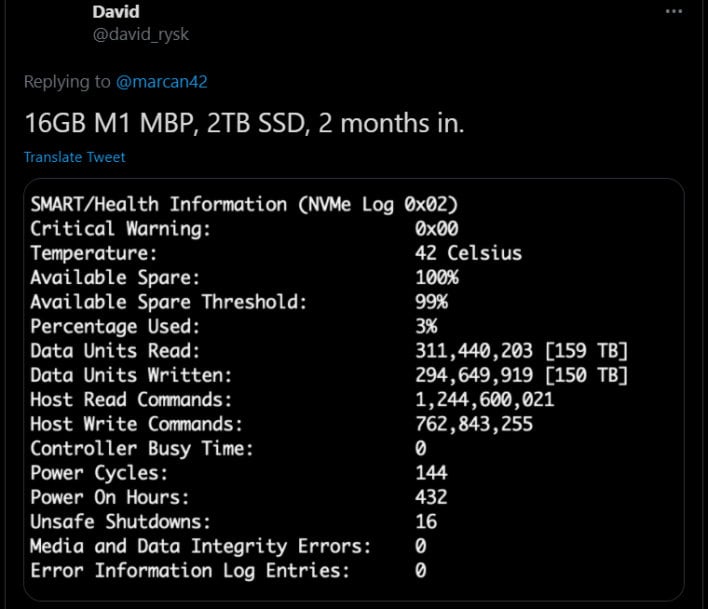 150 TB written in two months works out to 2.5 TB per day, or 104 GB per hour, which works out to 28.8 MB per second. It's also reading very little data from the disk more than once, as the system reports only 159 TB read. According to David, the Twitter user quoted above, his use is "heavy", including multiple browser windows and communications apps like Slack, Microsoft Teams, and Discord. He also says that he occasionally uses Parallels Desktop and Docker. Virtual machines and Docker containers can eat up memory, so maybe macOS was just running out of memory and writing to the page file.

While this could be alarming (especially if it's your system), were other users seeing the same wear and tear on their Macs' internal storage? The answers on Twitter vary. Most of the users responding to Martin seem to be reporting between 4 and 10 TBW, which is nowhere close to this example. There were also a few that showed between 30 and 50 TBW, which does seem kind of high, but it all depends on the kind of work the system is tasked with, and whether it has enough RAM to handle it all. The thing about disk writes is that they'll vary from workload to workload, especially if other tasks are going in the background. However, it does seem that for some users, macOS Big Sur might be paging pretty aggressively.

While something truly enormous like 150 TBW in just two months might be an anomaly, it asks the question: is your Mac wearing itself out unduly? We decided it was time to find out for ourselves. To get started, we needed Homebrew, a package manager for macOS and Linux, installed. Once that was complete, we could download and run the smartmontools package from the command line. This can all be done in one step by taking a page from Martin's original tweet. In a Terminal window, just enter the following command:


This command installed smartmon tools and told us about the built-in storage in our 2020 Mac mini. Even though ours has half the memory of David's mentioned above, it doesn't seem to be doing nearly as much work. Outside of the review, which included several ATTO SSD tests, it gets used daily for iOS development work and regular web browsing. Since it only has 8 GB of memory, there's still likely to be a decent amount of swapping, since we do run it kind of hard while developing, including running virtualized devices through the iOS Simulator.

We've had this Mac mini since around the end of November, and it currently shows 2.8 TB written. That is still more than ten times the capacity of its 256 GB SSD, but we've had the system for four months, and the Percentage Used stat still shows 0%. It's effectively got its full life ahead of it, which is more than we can say for some users. Let us know if you've got a Mac that seems to be burning through its built-in storage.