If this latest leak is accurate, we’re less than a month away from the launch of Apple’s new iPhone 13 family. The newest leak alleges that all four iPhone 13 models will launch on Friday, September 17th.

If we go backward from that date, Apple’s iPhone keynote would most likely occur on Tuesday, September 7th, based on previous launches. The September 17th launch date also lines up with speculation from Wedbush analyst Daniel Ives according to Mac Rumors.

With that said, the iPhone 13 family won’t represent a dramatic departure from the current-generation iPhone 12 and will continue with four separate models:

All the smartphones are powered by Apple’s 5nm A15 Bionic SoC and will likely feature Qualcomm’s discrete Snapdragon X60 5G modem. There has been speculation that the iPhone 13 could be available in 128GB, 256GB, and 512GB capacities, while the iPhone 13 Pro would double those figures across the board. 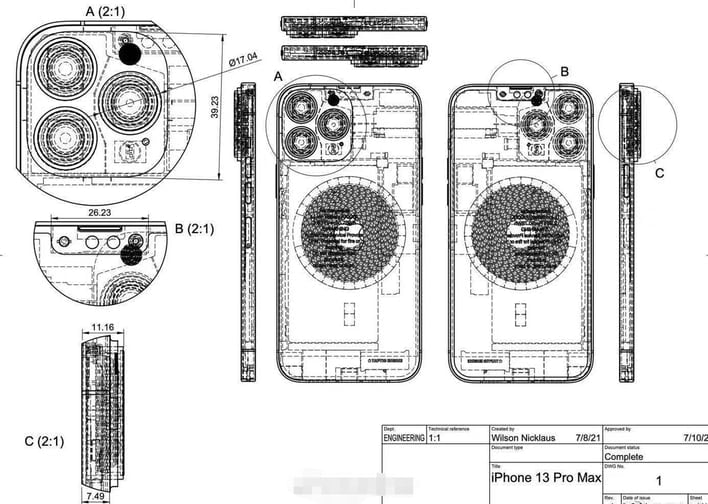 Apple is also emphasizing photography with this S-style refresh, with larger camera sensors and improved video-recording capabilities. In addition, while only the iPhone 12 Pro Max received sensor-shift optical image stabilization last year, the feature is allegedly being expanded to the entire iPhone 13 lineup. Other features reportedly on deck include marginally thicker bodies to accommodate slightly larger batteries, a thinner notch at the top of the display, and 120Hz ProMotion displays for the iPhone 13 and iPhone 13 Pro.

In other iPhone 13 news, svetapple.sk obtained alleged schematics of the upcoming smartphones, which confirm that the display notch is nearly 25 percent narrower than before. While smaller, the notch still eclipses the hole punch cutouts found on competing Android devices. The schematics also confirm that the rear camera bump is more prominent this year to accommodate the new image sensors and optics.