Redesigned Apple iMacs Rumored With 12-Core M1X CPU And Up To 31.5-Inch Display

In late 2020, Apple kicked off a multi-year journey to switch all of its Macs to homegrown Apple Silicon. The 13-inch MacBook Pro, MacBook Air, and Mac mini were the first of these machines powered by the surprisingly powerful and efficient M1 processor.

Many are eager to see what the next Apple Silicon-based Mac will be, and a new report from LeakApplePro suggests that the next-generation iMac will family will launch in the next month or two in two display sizes. The entry-level system (J456) includes a 24-inch display, while the higher-end system (J457) bumps that up to 31.5 inches. Both display variants are rumored to feature much narrower bezels all around, which explains the bump in screen real estate. The current iMacs are notorious for their oversized “chin,” which wastes quite a bit of visual space. 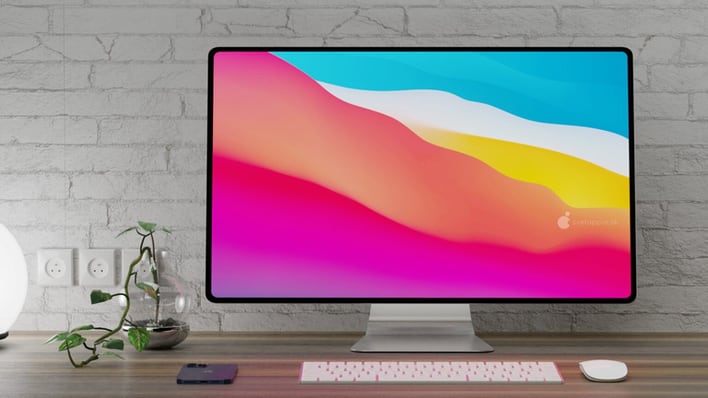 Recent iMacs have typically only come in one color: silver. However, rumors suggest that these new iMacs will also add Space Gray, Green, Sky Blue, and Rose Gold colors, aligning them with the current iPad Air family’s colors. If you recall, the original iMac made waves in the late 1990s with its colorful lineup, and it looks as though Apple is looking to return to its roots.

When it comes to performance, the new iMacs will significantly boost power over the M1 Macs. Current M1 systems are available with an 8-core CPU (4 performance cores, 4 efficiency cores) and either a 7- or 8-core GPU. The SoC in the iMac -- perhaps called the M1X -- will feature a 3.2GHz 12-core CPU (8 performance cores, 4 efficiency cores) along with a 16-core GPU. If it scales like the 8-core GPU in the M1, the 16-GPU could offer performance similar to the Radeon RX 5500 XT.

Although we don’t have any information on pricing for these incoming iMacs, the current 21.5-inch and 27-inch models start at $1,099 and $1,799, respectively.